The release of the 2013 6.7L Ram Cummins dropped a bombshell on engine tuners looking to provide programming for these engines.  Upon inspection, it was found that not only had the tuning itself deviated from the 2012 models, requiring new files to be written, but a mechanical wall had been put in place that would not allow the PCM’s to be altered using aftermarket tuning devices.  The master engine tuners at Bully Dog would not allow this to stop them from providing their superior engine tuning products for this application.  Rather, they quickly snatched up a 2013 PCM to determine what the actual cause was that would not allow the tuning.  From there, they were then able to determine a method that would allow them to remove this firewall from the computer, then allowing tuning to occur.  It sounds easy enough, but at this point, Bully Dog is the only company that has reached this point and we applaud them for that. 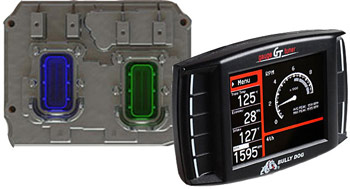 Bully Dog has even streamlined the process so that individual consumers can gain the benefits from tuning their 2013 Cummins.  A full tutorial is available from their website that walks you through removal and reinstallation of the PCM and tells you where to ship it to.  Once they receive the PCM, they quickly make the necessary alterations, and ship it back in a custom made package designed specifically for these computers.  You can then reinstall and enjoy the benefits of ANY tuning designed for the 2013 Cummins.  Well done Bully Dog.

To check out the Bully Dog GT for yourself head over to Diesel Power Products.com