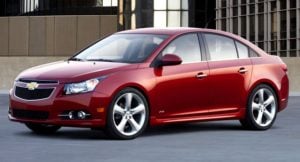 While an official announcement has yet to be made, rumor has it that Chevy is going to bring a 50mpg diesel compact car to the U.S in 2013.

The Chevrolet Cruze, reportedly the most popular car in the country last month, will be available in a diesel version that’s fuel economy will rival Toyota’s Prius, the popular hybrid that gets up to 51mpg in the city and 48mpg on highways.

Whether or not Chevy has established a price for the diesel Cruze is still not known. The price for the current base Cruze starts at $16,525 but because diesel vehicles are typically more expensive, we can expect the price to be at least somewhat higher.

According to Fox News, “GM spokesman Tom Wilkinson would not comment on the diesel engine”.