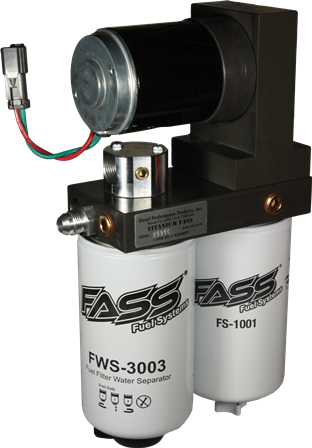 Diesel Performance Parts, GM Duramax, Made In The USA!
Written By: Diesel Josh

The single biggest downfall to all Duramax’s when trying to produce power above stock levels is the lack of a stock fuel lift pump.  When attempting to build over 100 horsepower above stock levels, the power curve quickly falls off because the injection pump is unable to properly pull sufficient fuel from the tank due to this lack of a lift pump.  Couple this issue with GM switching to a lower output CP4 injection pump in 2011, and fuel starvation can quickly become an issue.  In order to alleviate this issue, the most proven method is to add a FASS lift pump.  And further, to make sure that the fuel your engine is getting is rid of any contaminants or air, their Titanium Series is the pinnacle.  And now, for those of you with a 2015-2016 Duramax can upgrade as FASS has JUST released their Platinum Series pump for these applications as they required additional components compared to the previous 2011-2014 model years.  FASS has four fuel volume levels available:  95 GPH, 150 GPH, 220 GPH, and 260 GPH for those looking to make BIG power.