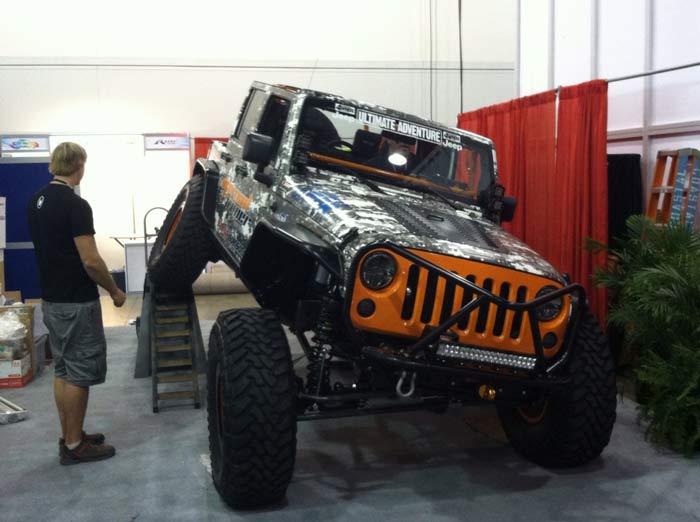 SEMA 2012 can now be written off of the “to-do” lists of many, and counted as history. It was another amazing show with too much to see, and not enough time to see it all. We had a great showing of our Off-Road Power Products division’s Cummins 4BT powered Jeep JK in the Borgwarner Turbo booth. The Jeep sat with the passenger rear tire on top of a three foot tall tire stand to completely flex out the Jeep for the entirety of the show, drawing considerable attention, along with its bright orange accents, and of course a powerful Cummins engine under the hood.

This year showed evidence of many trending products in our industry. In the truck market, it was noticeable that there is a shift from the huge lifts and gaudy paint schemes to a more pre-runner, sleeper look. Instead of trucks with 10”+ lift kits, there was a higher presence of 3-6” progressive rate performance suspension systems featuring fiberglass fenders for tire clearance. Rather than wild, bright paint jobs and overly chromed trucks, we saw a lot of flat colors and black accents.

This particular SuperDuty, shown on the left, wasn’t showcased inside any of the halls, but rather was outside drawing attention amongst hundreds of other vehicles that were strewn about. Even though it wasn’t inside under bright lights, it represents pretty well what trends we are seeing in the diesel truck market, and really was an impressive truck.

In regards to diesel performance products, technology is king. The major players were showcasing a lot of their newer streamlined electronics that will give nearly limitless programming potential, all while having a sleek interface that feels like most of the newer Smart Phone technology. We also got to meet with some of the companies producing injectables (nitrous oxide, water methanol) and see how they are building kits that will completely interface with some of this newer technology, making an all-inclusive package for the end user. So, instead of having an interface to control your programming, then a completely separate interface for your water-meth or nitrous, you will now be able to have it built into one system as a single, cohesive unit.

Industrial Injection was also drawing a lot of attention with their new TRIPLE turbo setup for the Duramax crowd. Currently, the D-Max’s are holding the highest horsepower records in the country, and this will only make it that much easier to be in the 1000+ HP range for anyone with a deep pocketbook. Also, our friends at BD had a lot of new products that are coming up, including their new one piece STAINLESS exhaust manifolds that will prevent again any leakage at the seams, as some of the modular units have been known to, on occasion. This line of new manifolds was such a big hit, that they managed to win a SEMA 2012 Global Award!

In both the truck and Jeep market, you couldn’t miss the LED light bars from several different manufacturers, especially Rigid, mounted on every piece of available real estate of the vehicles. Traditionally, these light bars have been popular for the serious off-road racers, but weren’t customary on most trucks. But here again, there is definitely a meshing of the two industries.

In the off-road market, AEV converted Jeep JK’s were nearly everywhere, which isn’t a bad thing, because they are AWESOME! Pictured above is a two-door version that was featured in the BDS Suspension booth. Pictured to the right is a four-door in AEV’s booth.

Another big crowd favorite was from our new friends over at WARN industries, with the release of their WARN Zeon Series of winches. This line of winches has been in the works for the last three years and is sure to blow away the competition. Its symmetrical design will allow for easier mounting nearly anywhere on the vehicle and is available in three different capacities: 8,000, 10,000, and 12,000 pounds (12,000 lbs. only available in steel rope). And in traditional WARN fashion, it’s built right here in the good ol’ US of A.

And finally, it goes without saying, of the abundance of just really well-built, impressive vehicles that we would all love to own one day. The time and effort that individuals and businesses put into building all of these rigs is insane. One of our personal favorites (besides our own, of course) was this 4BT Cummins powered, old school Power Wagon. It looked as if it could go anywhere, but you wouldn’t want to, simply because it was just too clean!

We look forward to what SEMA 2013 will bring to the table, and to see again many of our friends and colleagues in the industry.