Introducing Gerard Belanger, a Centerville, Michigan, man who drives what he calls a “jeep on steroids”.

Belanger found the diesel truck on GovernmentLiquidation.com, an Arizona web company which auctions off Army surplus equipment. Almost anything can be found on the site, with the exception of guns and weapons.

Belanger ended up spending only $2,000 on his indestructable truck. The truck is an M-818 diesel from 1970, with less than 20,000 miles on it at the time of purchase. Mechanically, the truck was like new, says a writer of the Leelanau News.

After a 6 month background check, the 5-ton diesel truck belonged to Belanger.

The truck has no luxuries, including no radio. This doesn’t bother Belanger one bit.

“If you drive this thing into the brush and scratch it up, you just get out the spray can and paint it. There’s no gloss or fancy stuff on it,” says Belanger.

Belanger, a builder by trade, uses his renovated diesel jeep for plowing snow during the winter months. This supplemental winter income is a neccessity to many construction workers in Leelanau County.

Belanger hired a hauler to transport the truck from the Air Force Base in Dayton to his cousin Kirk’s auto clinic in Wyadnotte. The independent hauler spent 4 hours searching for the truck amid rows and rows of twin trucks. The only indication of difference between the trucks were the serial numbers.

From the shop in Wyadnotte, Belanger drove to his truck to his daughter’s home in Grand Rapids, then to his home in Centerville.

The entire trip took 300 miles, and 64 gallons of diesel fuel.

Belanger recalled the trip, “The truck topped out at 55 mph, but with three-foot tires it drew respect from even patience-challenged drivers.” 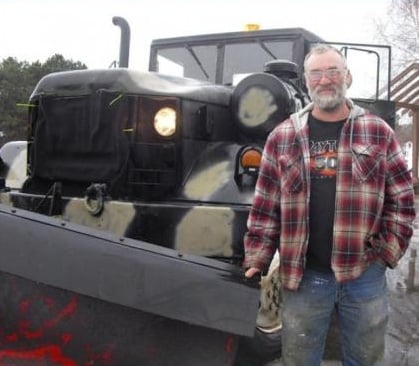