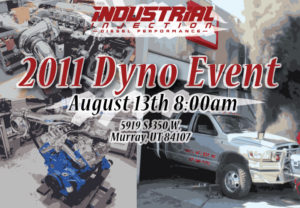 Last weekend Cooper, Tyler and Bryan from Diesel Power Products went down to Salt Lake City, UT to Industrial Injection for their yearly Dyno Day. They worked tirelessly on the tow rig all of the week before, right up until the moment they pulled out setting up brand new injectors and Carli Suspensions new 6″ lift with King 2. 5 Pin-Top shocks.

They eventually departed Spokane at 4pm on Friday afternoon and, following a long night that involved running out of diesel in the heart of Utah, finally reached their hotel at 5:30am. The group grabbed two or three hours of sleep and then headed over to Industrial Injection.

As soon as they arrived at the event they were thrilled to see that there were trucks everywhere. The gang instantly ran into people they know, including Robert from H&S Performance, Brett, Cody, Shane and Brady Williams from Industrial Injection, and a good number of their customers including Larry and Dusty Brown from Kennedy, TX.

The highlights of the day included Cooper putting down 905 horsepower on fuel only. During one of Cooper’s runs, one of the straps came loose at the rear of the truck causing it to lurch forward under full load.

The fact that he was on a mobile dyno 6 feet in the air made the incident quite frightening. After the dyno he relieved some stress by doing a burnout in the street right in front of Industrial’s building. (The truck that they’d towed down was Tyler’s 94 12 valve drag truck).

After making some adjustments to the transmission tuning on the truck Tyler was able to get 729 horsepower on Industrial’s inertia dyno. The numbers probably would have been a shade better on the mobile dyno but Tyler did not have a whole lot of desire to back the lowered drag truck up onto the mobile.

Following the event the DPP crew went out for a nice dinner with the Brown’s and then headed over to Brady Williams’ house so they could discuss trucks and a few of the upcoming product releases from Industrial Injection. Afterwards, they returned to the hotel and crashed until their alarms woke them up at 4:30am.
The guys grabbed some breakfast, packed up the trucks and headed back to Spokane.

Next weekend the DPP crew is heading over to Portland International Raceway for the last NHRDA drag race prior to the world finals in Kansas. They’ll have a booth set up right beside Bully Dog handling all of their retail sales for the event. Be sure to drop by and say hello!