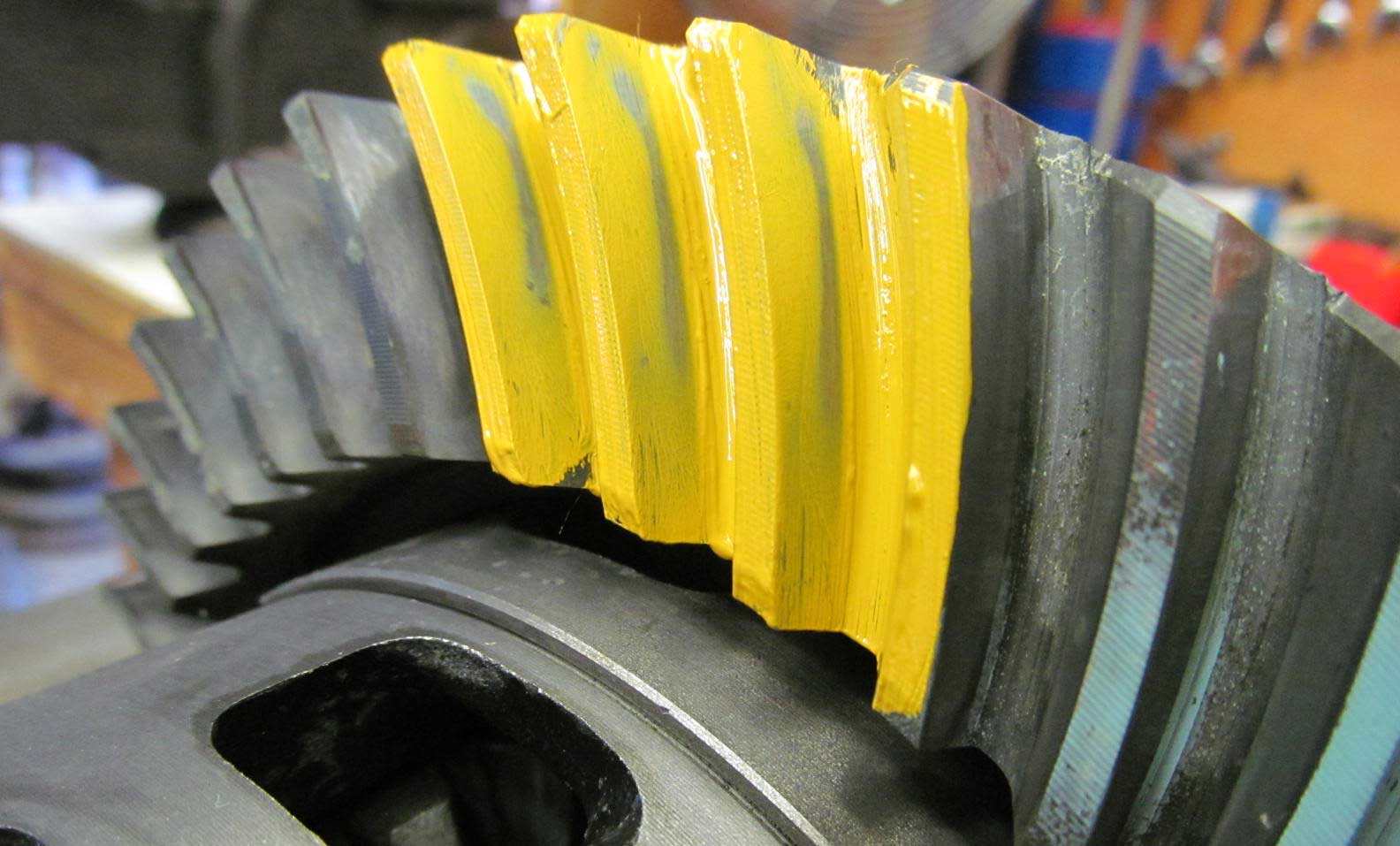 Some old Greek guy by the name of Archimedes had a saying that went something like “Give me a lever long enough, and I’ll move the world.” While such a lever would be impossible to build, the concept is proven in theory. Levers allow us to do some amazing things, because they multiply force, and you probably use one every day without even realizing it, from the tab that opens the can of your favorite energy drink, to a pair of pliers. A levers power can be expressed as a ratio, or a comparison of its lengths. We’re all likely familiar with levers from our playground days. If you have a see-saw with a length of 8-feet on one side and 1-foot on the other, the ratio is 8:1. Here’s something that might blow your mind: if you placed 800 pounds on the short side, you would be able to lift that massive weight by only exerting 100 pounds of force on the long end.

All vehicles use a lever of sorts in the drivetrain, and that’s gearing. Modern automatic transmissions use anywhere between six and ten different ratios or “gears” to give the engine extra force to accelerate, and at the same time, make the vehicle go faster down the road at lower engine speeds. A transmission is almost like having several levers of different lengths. While the trans is a topic for another time, today we’re going to be focusing on the gears that sit in your differential.

The most common axle ratios that come stock in a diesel truck usually have a numerical value somewhere between 3.31:1 to 4.30:1. This number is the relationship between size and tooth count of the ring and pinion gear. With a 4.10 for example, the pinion gear turns 4.10 times for every one turn of the ring gear, and by dividing the 41 teeth of the ring by the 10 teeth on the pinion, you get the ratio of 4.10:1. In real world applications, the higher the numerical ratio of the gearset, the more leverage an engine will have to move and accelerate the vehicle, with the tradeoff being a higher RPM compared to a numerically lower gear.

When engineers choose a gear ratio for the differential, several factors are taken into consideration, like tire diameter, engine RPM and torque output, and available transmission ratios. And just like with an equation in chemistry, if you change any one of those variables, and you’ll ideally want to change another to keep things balanced and working properly.

Adding taller, more aggressive tires is great for increasing traction in the rocks and mud, making it impossible to hear the radio on a long trip, and just plain looking cool when you park at the mall. When adjusting tire size, it’s important to remember a larger tire is like a shorter lever, and smaller tires are like a longer lever. Let’s say you drive a 6.7 powered F-250 that came stock with a 3.31 ratio axle. This combined with the stock tire size of about 31 inches would give a low engine RPM when cruising down the highway, good fuel efficiency, and average acceleration. But when you take that same truck and install a 40-inch tall tire, (shorter lever) you are effectively creating more work for your engine. It will now take a lot more power (and fuel) to accelerate and maintain cruising speed, so your fuel mileage will go down. Also, because you are now driving at highway speed at a lower RPM and higher torque, your EGT’s will go up, the shift schedule will be out of sync, and trans fluid temp will go up since you’re working it harder. And don’t even get me started on towing with stock gears and oversized tires; that’s about a 10 on the scale of dumb ideas. So, what’s the fix? If the bigger tires made the lever shorter, just change the gears to make the lever longer again and bring the equation back into balance.

The rule of thumb is as follows: if you add a taller tire, you need to swap to a numerically higher gearset to compensate, and inversely a smaller tire needs to be matched with a numerically lower gear. But how far should you adjust? A bit of simple math will get you in the ballpark. In our previous example, we went from a 31-inch-tall tire to a 40, and the new diameter is 29% larger (40 ÷ 31 = 1.29). So, if we take the old gear ratio and multiply it by the difference (3.31 x 1.29) we get an ideal ratio of 4.27. Of course, ratio options are limited based on how ring and pinion gears are manufactured, but the closest option is 4.30. However, you need to remember this math will only bring your equation back to what the factory thought to be ideal, not what is best for your particular application. You need to consider the use of your truck adjust accordingly. While 4.30s would work OK with those 40’s for getting to soccer practice, if you off-road a lot or tow heavy trailers, you might consider stepping up to a 4.56 or 4.88 to help move that extra weight and give a little better acceleration when daily driving. A great source for gears is Nitro Gear and Axle, as they have a wide range of ratios for all full-size diesel trucks, and when you are installing gears, it’s always a good idea to pick up new bearings, a higher capacity diff cover, and maybe even upgrade to some synthetic fluid.

If you aren’t into big tires and crazy lifts, re-gearing can still be used to your advantage. If you have a daily driver that rarely tows, or you lowered your truck down and it has a smaller tire, swapping to a numerically lower gear will help keep the engine from revving to the moon on a highway drive, and improve fuel economy. Plus, if you’re a drag racer, (though it sounds counter-intuitive), a numerically lower gear can also improve launches and ET. Since diesels make so much torque, a boosted launch can easily send the tires up in smoke, even in four-wheel drive. When you’re spinning, you’re not winning. Dropping your stock 3.73’s to a 3.42, would give the engine a shorter lever, making it harder to spin, and easier to put that massive torque down to the ground. This is the same reason why many race TCM tunes include 2nd gear starts. Whether you’re lifted or lowered, it’s all about managing torque with the proper gear ratio.

While You’re in There…

There are a couple upgrades you might consider adding at the same time you install new gears, since the axles are torn apart, and the labor time won’t be much higher. Many trucks come with a limited-slip differential which works OK for daily driving, doing burnouts, and sometimes getting un-stuck. But, if you are a serious off-roader or go to the track, the stock differential can let you down. And if you have an open diff, then you’ll definitely want to fix that “one tire fire” when installing new gears.

A selectable locker is a great choice for many different applications. The name ARB is synonymous with the air locker, and they are a very helpful upgrade to have. Whenever you’re in a performance driving situation or just get stuck, all you have to do is flip a switch inside the cab. A small amount of compressed air is sent to the locker, and it mechanically links both wheels on the axle together, ensuring they will always be spinning, no matter what. Even if one wheel is off the ground, the other will still be getting power, unlike many stock open or limited slips which might just spin the wheel that’s in the air, leaving you high and dry (or rather low and stuck). The best part about an air locker, is when you are done in the mud and want to drive home, simply flip the switch off, and you’ll never know it’s any different from stock. Mechanical lockers work great for simplicity and traction, but they can be a bit unpredictable on the pavement, so an air locker is the best of both worlds.

, and they are a very helpful upgrade to have. Whenever you’re in a performance driving situation or just get stuck, all you have to do is flip a switch inside the cab. A small amount of compressed air is sent to the locker, and it mechanically links both wheels on the axle together, ensuring they will always be spinning, no matter what. Even if one wheel is off the ground, the other will still be getting power, unlike many stock open or limited slips which might just spin the wheel that’s in the air, leaving you high and dry (or rather low and stuck). The best part about an air locker, is when you are done in the mud and want to drive home, simply flip the switch off, and you’ll never know it’s any different from stock. Mechanical lockers work great for simplicity and traction, but they can be a bit unpredictable on the pavement, so an air locker is the best of both worlds.

Normally, I am a huge advocate of people working on their own vehicles. However, if you’ve never attempted to re-gear an axle, I would encourage you to seek the help of a professional, or at least buy a few books on the subject and spend a lot of time studying before you attempt the job. There are three tolerances that must be set perfectly when installing gears: pinion bearing preload (how much force it takes to turn the pinion in an empty housing), pinion depth (distance the pinion is away from the ring gear) and backlash (distance between the teeth of the gear). On many axles, these tolerances are adjusted with different shims in increments as small as 0.001”. Also, special tools are required for the job, like a large torque wrench, a small dial-type torque wrench that reads in inch-pounds, calipers for measuring thickness, and a dial indicator to measure backlash. Plus, you have to be skilled at reading a gear pattern to make sure the new gears are meshing together properly. If you get any one of these tolerances wrong, the gears can fail prematurely, run too hot, or just make too much noise. The costs vary depending on where you live but expect to pay a professional shop somewhere in the ball park of $200 to $400 for labor on each axle.

Do you have to re-gear simply because you added larger tires? Put it this way: you don’t have to shower or brush your teeth every day, but it kinda stinks if you don’t. And while adding a locker isn’t necessary, it can sure help get you out of a jam.

There’s a lot of confusing terminology thrown around when talking about gears. I always specify “numerically high” or “numerically low” to avoid any confusion, but its commonplace to refer to gear ratios as simply high or low in conversation, which is backwards from the numerical value. An old muscle car guy might say something like “yeah, that old Camaro gets off the line in a hurry with those low gears” or “it’s an interstate cruiser with those high gears.” One way to keep track of it, is think about a transmission’s ratios. Usually first gear (called LOW gear) has a HIGH numerical value, and 4th or 5th gear (called HIGH gear) has a numerically LOW value. Just remember, the higher the number the lower the gear, and the lower the number, the higher the gear. Confused yet?