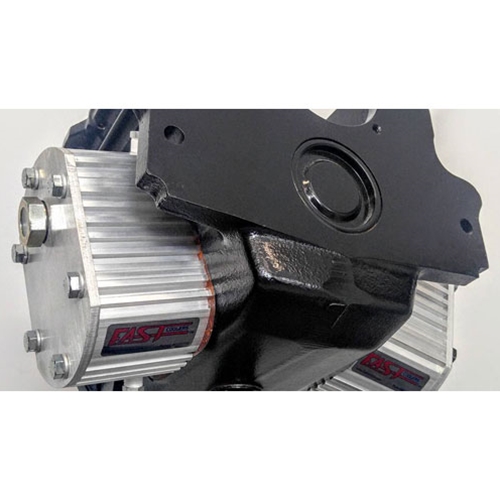 For anyone that owns a diesel, most are at least relatively familiar with the concept of replacing the stock transmission pan with an aftermarket pan, featuring a larger capacity, aluminum construction, and other features that aid in extending the life of the transmission. But, what most aren’t aware of are the benefits, or even the capability, of doing the same thing on a manual transmission. Sure, in general, manual transmissions run cooler than an automatic, but especially for those that are pushing the limits of their transmission, the benefits are still very tangible. While a manual transmission doesn’t feature a traditional transmission pan like an automatic transmission, most feature PTO (Power Take Off) covers made from thin, stamped steel typically, which can be replaced with aftermarket covers, and the most trusted name in this arena is a company called Fast Coolers. How the Fast Coolers work is that they replace the thin cover with a deep “pan” that extends the opening, allowing for substantially more capacity, that you can then either reinstall your stock cover(s) or install one of Fast Coolers optional covers. While the stock covers will get the job done, the optional covers feature a cool sight glass so you can see the color of your oil and are also thicker to deliver rigidity to the system.

While these covers are an excellent upgrade to any manual transmission, we’ve found they deliver HUGE benefits to the G56 transmissions found in 2005.5 through current Cummins powered Dodge Rams. In mid-model year 2005, Ram switched from the NV5600 six speed to the G56, which initially seemed to be a good idea due to the smooth shifting characteristics of the G56, but its since proven that it has several flaws. First, the case is aluminum in order to save weight, however, this aluminum construction is obviously not as strong, and can actually crack, in comparison to the cast iron units. Secondly, when you upgrade from the stock dual mass flywheel clutch that is known to fail in favor of a tried and true one piece flywheel style of clutch, this transmission is known for gear rollover noise. Guess what, Fast Coolers solve both of these issues! To aid with the first issue, the Fast Coolers provide rigidity to the housing right where it needs it most, so a definite plus. In regards to the gear rollover noise, its common practice to overfill the transmission by roughly 1.5 quarts by removing the shift boot to alleviate the noise, but because each Fast Cooler gives an extra quart (thus two extra quarts if you upgrade both sides), it takes care of the issue in of itself. And then the obvious, upgrading with a pair of Fast Coolers has proven to reduce transmission temperatures by 30 degrees on average, saving your clutch when towing or hot rodding.

And the best part, they’re one of the least expensive upgrades you can make! To find out more information about Fast Coolers, CLICK HERE.