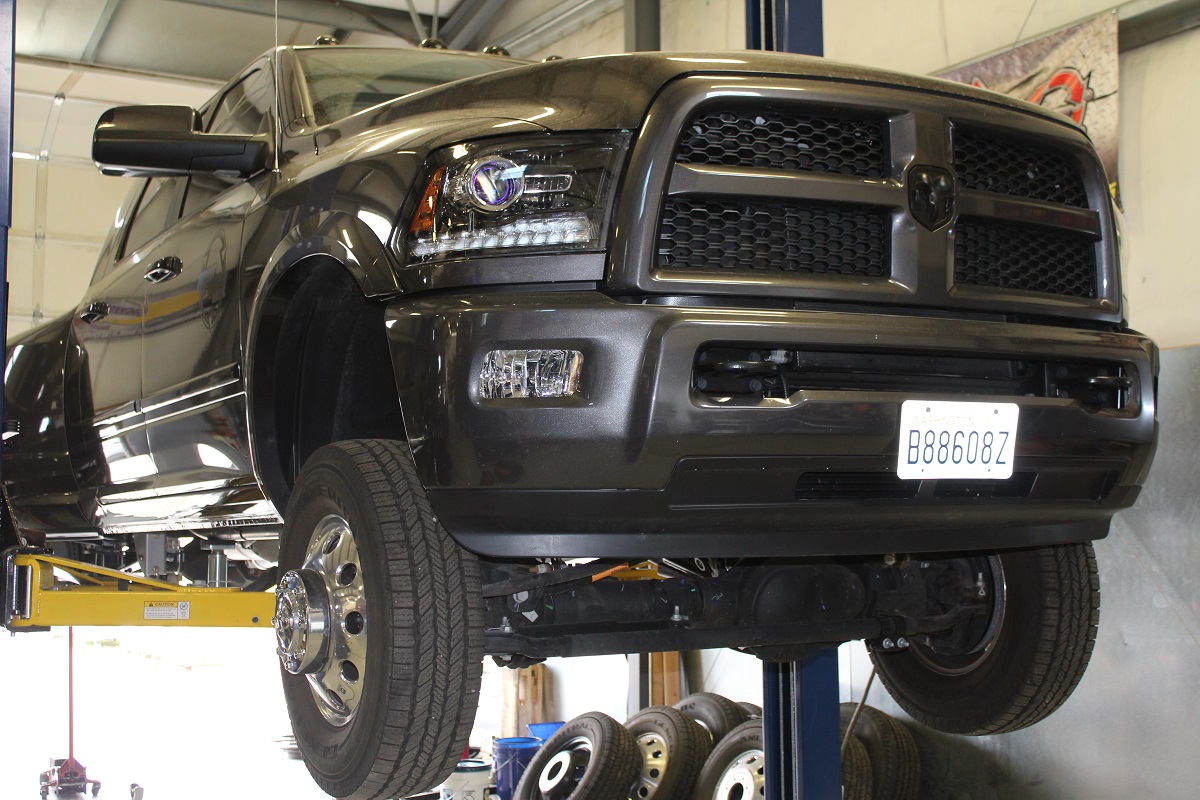 Over the years, we have built numerous vehicles that were intended to serve many purposes and have the ability to do anything we could throw at them, whether it was crashing over rocks and stumps, high tailing down the quarter mile, or simply an impressive truck to drive back and forth with. And as we’ve began to attend more events around the country over the last few years, we’ve had the need to transport more vehicles than we had drivers for, obviously requiring trailering a few. In order to accommodate transporting several vehicles at a time, we had Fox Trailers build us an immaculate 38’ bumper tow car hauler that also has the ability to carry additional gear, oversized spare tires, and gobs of other items. At the time, none of our vehicles really had the ability to tow a gooseneck due to their size, but Fox was able to build the trailer knowing that one day we would have a vehicle specifically setup for towing. And that day has come!

While our high horsepower diesels on 40” rolling stock have never failed us and have done an exceptional job of transporting this and other trailers across the country, it was obvious that a lower-slung dually would be in our future. We now have welcomed a 2014 Ram 3500 Mega Cab Dually into the stable that will serve as the dedicated “Tow Rig.” With the upgrades Ram has done to the suspension and steering on these trucks, its really quite impressive out of the box, but we also welcome the challenge to upgrade all of these new components to create utter perfection.

Before the truck ever made its way to our parking lot, the chrome just had to go. In order to accomplish this, we dropped the keys off to our friends at Perfection Auto Body to go about de-chroming and de-badging the truck front to back. We opted to leave the Rams heads in the grill and tailgate, but have them painted in a flat black to go along with the theme of the truck. The grill, bumpers, mirrors, and anything else that was left was then all painted to match the rest of the truck. In order to protect cargo in the bed, a spray in liner and Truxedo Lo-Pro tonneau cover were installed.

And now onto the really important items for the Mega: SUSPENSION! Some of the components that we are using are out-of-the-box ready for the 2013+ suspension, while others definitely are not. In order to keep the front bumper from dragging, we installed a simple ReadyLIFT leveling kit that would gain us an additional 1.75” of clearance. Next, the garbage monotube shocks that come on these trucks were thrown in the scrap bin and swapped for a set of Fox 2.5 Internal Bypass Reservoir Shocks. These alone obviously make a remarkable difference in the overall ride of the truck, as well as provide additional dampening for the loads we will be carrying. 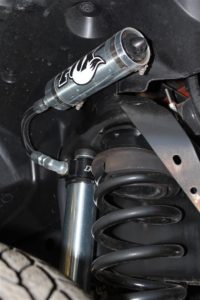 In the rear, things got serious. We knew we wanted a fully automated, air ride assisted system that would eliminate the need for the factory overloads. On top of this, ride quality is crucial as many of our hauls are cross country, thus an exorbitant amount of seat time is involved. We looked to R4Tech Suspension for one of their air-over-leaf suspension systems. Their system eliminates the entire factory leaf spring in favor of a smaller leaf pack accompanied by a trailing control link under the main pack that prevents against windup, as well as wheel hop. Overall, the system will deliver smoother axle motion and a better ride as the majority of the weight is being suspended by the air bags. These systems are designed to be completely bolt on, but unfortunately a kit has not been released for the newer suspension design so considerable modifications were required in order to get this system mounted to the rear end of our dually. But if you’ve read through our previous article about the Cherokee Chief, you’ll understand that these modifications wouldn’t hold us back from getting what we want.

Now, in order to control everything, we looked to ARB and AccuAir. We’ve dealt with ARB compressors for some time now on our off-road vehicles to run Air Lockers, as well as have accessory air on demand, and knew this would be the right path to control the airbags. The ARB Twin compressor provides enough air to run air tools with ease and would be a good option for a complete on-board air system. In order to control everything, we’ve found the AccuAir systems to be very complete and reliable, coupled with the remote touch pad that you can literally store anywhere, thus seemed like an obvious choice. Overall, with the combination of the three major components, we couldn’t be happier with how this entire system went together and know that it will deliver the ride quality and suspension control that we were after.

As new changes are made to the truck, we’ll be sure to keep everyone in the loop with the results. The next newsletter should provide some great feedback to the current changes being made, as well as ones that are already in the works!