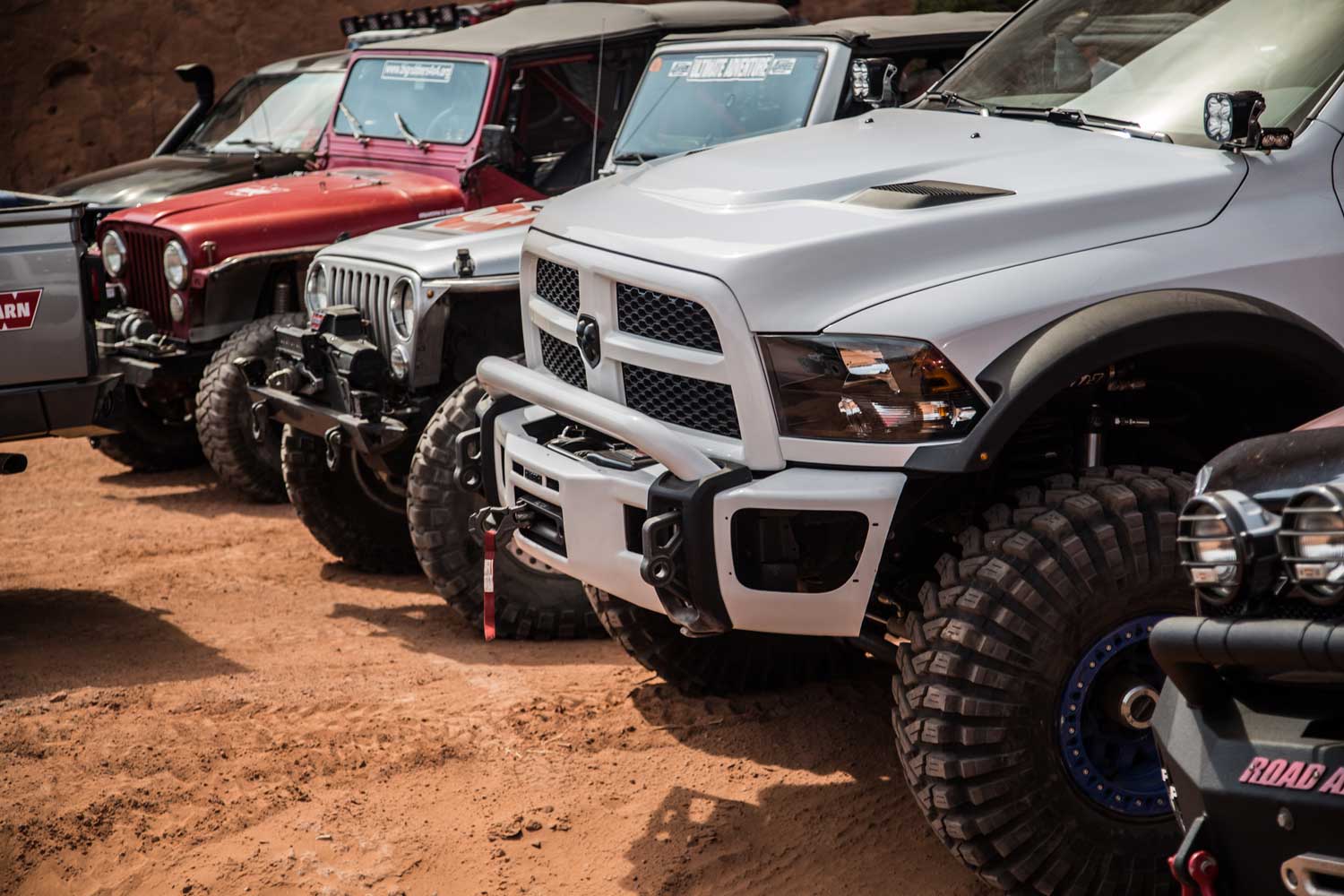 Its Spring time, warm weather is upon us, birds are chirping, the days are getting longer, and all of that means only one thing to us:  Easter Jeep Safari in Moab, Utah.  This was our sixth year in a row attending this amazing event that turns a small town into an offroading mecca for one solid week, bringing everyone from weekend warriors to the biggest names in the industry out on the red rocks for some fun in the sun.  This year was filled mostly with highs and a few unexpected hurdles to overcome, but worth every second of any debacles and we built some cool stories that will last.

This year was a little different for us from years past as it was the first time we would not be bringing a Jeep as one of our toys.  Yeah, we know, it’s a Jeep event, but you wouldn’t believe the amount of non-Jeeps that are there, and we really like our full size diesel powered rigs in case you hadn’t noticed, so it only seemed fitting.  In previous posts, we took our readers along the journey of building our brand new, off-the-showroom-floor 2016 Ram 2500 Cummins into a regular cab, short box on 42’s.  In case you missed any of that, click on the links below so you can check out all of the awesomeness that went into the build of Project Howitzer, or Howie as we affectionately call him  Besides finishing up on Howie, we were also building a Jeep JKU for S&B Filters that we would unveil to them at EJS.  This was not a short order build either, as it was originally a two wheel drive (yes, they make those!) completely virgin Jeep that needed a lot of attention before it would be ready to party with the big boys in Moab.

As our deadline of Friday quickly approached, we knew that long days and longer nights lay ahead.  The good news is that both vehicles were ready to roll Friday, but it wasn’t until 11:00 at night, a departure time that was even a little late for our blood.  It was decided that a good nights rest was in order and we would hit it hard Saturday.  With little to no testing on S&B’s completely revamped JKU, we hit the road for the long road trip to Moab.  To some, this would seem like an atrocity waiting to happen.  However, we are confident in our capabilities with the level of detail we put into the builds, and the background knowledge that is shared by our entire team, so to us, it’s a null issue.

It wasn’t long after hitting the road on Saturday that the “fun” started.  In case you didn’t catch the sarcasm in our quotation marks, it runs deep.  Allow me to paint the picture for you; S&B’s Jeep is from SoCal, where Jeep tops aren’t really a thing, and we’re from Washington State, and would be driving through North Idaho and Montana before dropping south.  And up here in this neck of the woods, Jeep tops are definitely a thing.  The rain started in on us, which wasn’t all that bad, but then the snow…oh, the snow….it came and it never wanted to lift.  As long as you were going over 45 MPH, it really wasn’t all that bad as the snow would just shoot right over.  Then Butte, Montana happened where we were met with hurricane force winds and a full on tsunami level rainstorm.  So I guess its good that the snow turned to rain again??!!  Oh well, we were on our way to have a LOT of fun in Utah, just remember to keep your eyes on the prize.

Wrapped in a Carhartt jacket, head covered by a fur hat, and heater blowing like a windstorm in the Mojave desert, we continued our journey southbound back into Idaho where, upon entering into Idaho Falls, the rain turned back into snow and our passenger side windshield wiper decided it had enough and went on strike.  That’s right, no top and only one windshield wiper, which means that our heat source had to be turned over to defrost to prevent the glass from frosting over.  At this point, we were moving a little slower so we decided to stop in Spanish Fork, Utah for some much needed rest and a hot meal. The next morning, we were welcomed by three inches of fresh, “beautiful” snow blanketing the terrain (did you notice those sarcastic quotation marks again?).  If you’ve ever seen the movie “Finding Nemo,” its reminiscent of Dory’s words of wisdom, “just keep swimming, just keep swimming.”

As if Mother Nature had opened the gates of heaven, as we rolled down the descent into Moab, the skies cleared and the temperature quickly rose to an inviting 60 degrees.  We could feel our morale lifting and anticipation growing.  In what seemed like the blink of an eye, we had Howie unloaded from the trailer and went to get some grub before hitting our first trail.  It became immediately apparent that we would need to do a little finessing on the AEV Premium Front Bumper to avoid tearing a chunk out of our new 42” Maxxis Trepadors.  Our trusty sidekicks, Cody Bear and Pistol Pete, went to work with a grinder and cut off wheel to give us the extra clearance we needed with the help of some borrowed tools from our friends at Nemesis Industries.  In no time flat, we were on the trails with a group of industry friends and ready to see how our creation handled the rocks.  Being good boys, we decided to break Howie in on Fins and Things, a mediocre level trail that does feature some more difficult lines that would allow us to stretch her legs and test the articulation capabilities.  One obstacle in and it was evident that we nailed it, truck was performing flawlessly.  We spent a few hours traversing the trails, meandering our way up rock strewn ascents and crawling down their counterparts.  For those that have never been to Moab, we highly recommend Fins and Things as your first trail, no matter your skill level, just so you can first familiarize yourself with how your vehicle performs in this particular terrain. With some dirt on the tires and the snow melted from our minds, it was time to meet up with the crew from S&B for the official unveiling of their new toy over dinner and discussion.

Monday morning, after a short stint on a trail ride put on by Dynatrac, we switched gears and headed out to Flat Iron Mesa so that we could give S&B some one-on-one “how-to” courses.  Sometimes, these courses can involve a lot of “do as I say, not as I do,” but this went pretty smooth and they were in the groove in no time.  At that point, all of us shot over and made the full loop of Fins and Things that consisted of S&B’s JKU, Howie, and our Tracker.  While huge group rides are fun, this quaint outing was a blast as no one was pressured to move through an obstacle beyond their capability.

Tuesday, we awoke amped up to start the day with the Warn sponsored trail ride that takes us to Behind the Rocks.  You could say that Howitzer put on a clinic called “How to Make It Look Easy 101.”  That truck just rolled right up and over anything we pointed it at.  Unfortunately, our Tracker didn’t share in the same glory as it grenaded the rear differential on a rock, also causing catastrophic failure of the transfer case.  No worries, we got the Tracker back to the trailer in time for us to swing over to the Dynatrac party at Grandpa’s Garage.

At the halfway point of EJS, and the entire reason we originally started attending, was the Fullsize Invasion.  This event is tailored specifically for the “wheelbase impaired” rigs that takes us on the Gold Bar Rim trail.  While the trail may not be as narrow with quite as many hard core obstacles as some of the others, it still has numerous areas that you can get buck wild on and test the limits of your vehicle.  At this point, it truly felt as if Howie had found its own and we had Jedi mastered its capabilities.  A lot of the video you can see of Howie was taken on the Fullsize Invasion, but honestly, the video doesn’t do it justice.  That night, we met up with our buddy ol’ pal, Fred Williams from Dirt Every Day, and the rest of the gang in preparation for our annual night run up Hell’s Revenge.  This gnarly trail is sketchy in the daytime as you traverse up a steep, narrow, slick rock canyon.  At night, though, when your lights are aiming at the sky, you’re relying solely on your spotters to navigate.  One wrong line up Hells Revenge, and you’re likely to be seeing sky-ground-sky-ground-sky-ground, all the way to the bottom.

Since the Tracker was down and out, and not wanting to leave anyone behind, we parked Howie to give him a break and busted out Sledge, our crew cab short box Cummins featuring a full AEV package with 40’s.  With the four of us comfortably riding in Sledge, we crawled right through Hell’s Revenge, made it to the most spectacular view point at the top of the trail, and circled back.  Sledge can best be described as a Swiss Army Knife truck.  It towed Howie all the way to Moab with ease, and the only change we made for Hells Revenge was to air down the tires.  I think anyone can appreciate a truck of that diversity that can still haul a large family around.

Thursday marks the beginning of the vendor show with booths galore showcasing all of the newly released offroading products from all of the big name companies.  This is a great opportunity for us to make our rounds seeing old industry friends, and making new ones that will allow us to offer you the latest products.  Probably our favorite booth was from Axis Industries, showcasing their Cummins 2.8L swap components, and we look forward to bringing you more details on that very soon as we gain more insight and more of these engines become available.  That afternoon, we loaded up Howie onto the back of Nemesis Industries’ flat bed trailer for display and we high tailed it out of there, itching to go hit some trails again with Sledge.

The vendor show continued through Friday where we sat down with a few of the magazine editors about some upcoming articles that may or may not be featuring Howitzer.  That evening was the annual last night sushi dinner where you can see exactly how much raw fish and Sake you can consume before hating yourself.

As usual, Saturday morning came way too early and marked the end of EJS and our stay in Moab.  The return trip home was not nearly as exciting as the trek there, only to be disturbed by several unforeseen detours caused by our fearless leader, Cooper, essentially forgetting that he was the leader of the pack, leaving his posse in his dust.

Overall, Easter Jeep Safari 2017 was yet another amazing experience that we will never forget, and you can count your bottom dollar that we will be back again next year.  As for Howitzer?  He’s off getting a custo

m expedition rack built at Nemesis Industries and reinvigorating himself before being put through the paces at  the upcoming Ultimate Adventure.

CLICK HERE FOR BUILD ARTICLES LEADING UP TO MOAB.

2 thoughts on “Project Howitzer: The Outcome”