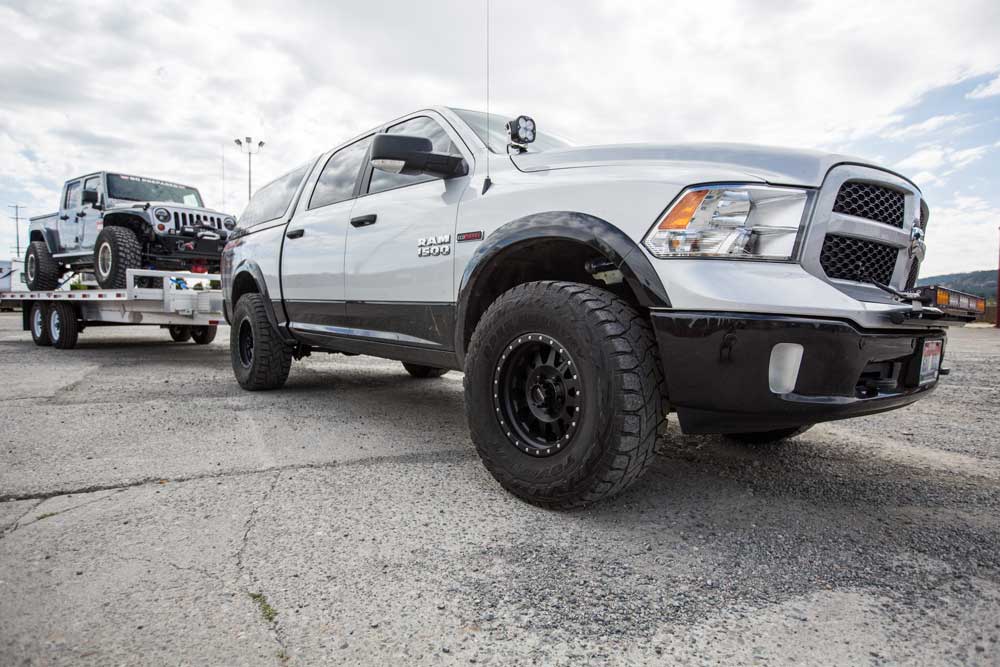 When you talk about buying or owning a diesel truck, the first thing that comes to mind is a lifted up 1-ton that hauls a gooseneck trailer, takes up more than one parking spot, and costs a small fortune to fuel up each week. As much as we hate to admit, those big trucks aren’t the most practical to live with every day, and for some owners (including myself) the truck is empty 90% of the time. The heavy-duty diesel pickup will never disappear American roads, but there is a growing number of smaller diesel-powered pickup trucks that are much more practical and sensible as a commuter. While you may not be able to haul 26,000 pounds with a half-ton, what you do get is better fuel economy and a smoother ride, all in a slightly smaller package you can park anywhere. Today, almost all major pickup manufacturers offer a diesel alternative in their half ton trucks, so let’s get familiar with the new kids on the block.

In 2014, Ram lead the charge in the half-ton class when they introduced the 3.0-liter EcoDiesel. Most people hoped the engine would be produced by Cummins, since they had a long working relationship, but sadly, that didn’t work out. Instead, Ram turned to its new partner Fiat, who happened to own an Italian engine manufacturer, VM Motori, to source the new powerplant. The 3.0-liter V6 is a bit different from its heavy-duty cousins, as it features dual overhead cams instead of the traditional pushrod and cam-in-block design. Because of this, the engine has a relatively high rev limit of 4,800 RPM, and it’s rated at 240 horsepower and 420 pounds of torque. While those numbers might not seem very impressive compared to a full-size diesel or even a gas V8, remember that’s coming from an engine about half the size we’re used to. What is impressive however, is the EPA rating of between 27 and 29 MPG on the highway. This is in part due to the 8-speed automatic attached to the V6, and the lighter weight of the pickup. Speaking of weight, the Ram 1500s with the EcoDiesel can still move some tonnage, as they’re rated to tow around 9,200 pounds, depending on which configuration you select.

Fast forward to 2016, and Nissan was the second manufacturer to join the ranks offering a diesel powered ½ ton truck, the Titan XD powered by the 5.0-liter Cummins ISV. Much like the 3.0 EcoDiesel, the Cummins V8 also featured dual overhead cams, but its party piece was its two-stage turbo system. In its simplest explanation, there are two turbochargers; the smaller of which produces higher pressure and low volume, and the larger turbo which moves a greater volume of air at a lower pressure. Depending on the power demand, the exhaust gasses are directed to the turbine of one or both turbochargers. At low engine speed, the exhaust will be directed to the smaller turbo to do most of the work, but as RPM and load increases, the exhaust is diverted into the larger turbo to help pressurize the engine. And while the boost is not compounded in stages, you have the benefits of both a small and big turbocharger in one very sophisticated and compact package. Other than that, the V8 Cummins is pretty normal: it’s a common-rail diesel powered by a Bosch CP4 injection pump, and it pushes out 310hp and 555lb.ft. of torque. The 5.0 ISV is bolted to an Aisin Seki A466ND six speed automatic transmission, which is comparable in size and capacity to the AS69 found in 1-ton Rams, meaning the Titan has the largest, heaviest, and highest rated automatic of any of the baby diesel trucks.

However, the Nissan XD is the square peg of the pickup world. While it is technically classified as a half-ton truck, its frame and drivetrain are much beefier than its counterparts.  In fact, the curb weight of the truck approaches 7,500 pounds when fully optioned, which according to both manufacturers specs is identical to what a crew cab 2500HD Duramax weighs. Despites its husky proportions, the Titan is only rated to tow 12,200 pounds in its highest configuration (much less than a ¾ ton) but it has a factory available gooseneck hitch. An EcoBoost F-150 is rated to tow 1,000 pounds more yet weighs much less. It’s almost as if the Titan XD is a 5/8-ton truck, overbuilt in some areas, yet lacking in others. But to me, that’s the sweet spot between the big-boy diesels, and the V6 or 4 cylinders found in smaller trucks.

While Nissan was building big in 2016, GM went the other direction with their newest diesel engine, the 2.8-liter, four-cylinder, dual over-head cam, LWN Duramax which was found under the hoods of their mid-size pickups. Instead of going after maximum towing capacity or horsepower, the goal was fuel efficiency, and they knocked that out of the park as the 2.8 Duramax was initially rated at 31 miles per gallon on the highway. Let that sink in next time you’re filling the bottomless fuel tank on your Superduty. The pint-size pickup isn’t in the ½ ton class, but that gives it a few benefits, as its super easy to find parking spots, it’s much more maneuverable, and has a Cadillac-like ride quality. However, it’s still plenty capable as a pickup truck both on and off road, and its max towing capacity is 7,700 pounds. Here are the numbers: the 2.8 four-cylinder puts out 181 horsepower and 369 pounds of torque, which is plenty if you consider the truck its pushing weights less than 4,800 pounds, even for the fully equipped four-wheel drive models. The LWN is backed up by a GM 6L50 six-speed automatic which has a wide ratio spread which helps the engine accelerate and have a comfortable low RPM when cruising down the highways.

In 2018, Ford threw its hat into the ring, and introduced their version of a half-ton diesel pickup. Like every engine mentioned today, the 3.0 Powerstroke features a compacted graphite iron block, aluminum cylinder heads, dual over-head cams, and a forged steel crankshaft. When combined with their single VGT turbo, the baby Powerstroke produces 250 horsepower and 440 pound feet of torque. Ford claimed another first for a diesel pickup with the standard equipment 10 speed automatic transmission which has a deep 4.70 first gear ratio and a 0.64 tenth gear, and plenty of options in-between to keep the V6 right at the RPM of peak torque.

If you browse through the spec sheet in your Ford brochure, you might notice some interesting comparisons. While the 3.0 Powerstroke is a spunky mill, it’s not the most powerful, nor does it carry the highest tow rating of the F-150 family. That honor goes to the 5.0 Coyote and 3.5 EcoBoost V6 respectively. While the 3.0 Powerstroke lands right in the middle of the five engine options available for the F-150, there is one honor it takes, and that’s best fuel mileage. It has an EPA estimated rating of 30 MPG, but real world tests have suggested with careful driving, you can beat that by a couple numbers. While a diesel powered F-150 might not be the workhorse of the bunch, if you want to haul the family around in style and comfort, and rarely need to haul anything larger than a side-by-side, then your only challenge is to pick which interior package is right for you.

Not to be left out of the ½ ton diesel game, in October of 2018, some unofficial leaks gave a look at what might become the third diesel engine in GM’s lineup, a three-liter straight-six for the Silverado 1500. The rumor suggested the engine may carry a rating of 282 horsepower and 450 pounds of torque which puts it right on par with the other 3.0-liters, the Powerstroke and EcoDiesel, and we can only assume the towing and fuel mileage ratings will be competitive as well. Hopefully by the end of the year, we’ll have some solid info on this new powerplant, and maybe even some models will hit showroom floors.

As a performance builder, I’m always interested to see how the aftermarket reacts to a new segment, and in the case of ½ ton diesels, it’s admittedly a bit slower than expected. With the bigger diesels, you can build anything from mild to wild, but with the small engines, there just aren’t many options yet.

Intakes have always been a popular first modifications to improve horsepower and fuel economy, and S&B has your little diesel covered. Just like with any engine, a less restrictive air pathway and cooler air temperature is a good thing, since as we all know, colder air is denser and can contain more fuel, which means (insert Tim Allen grunt) More Power.

One common complaint about late model trucks is the unresponsive throttle pedal, a disconnect between your right foot and the rate of acceleration. A BD Diesel Throttle Sensitivity Booster can fix those problems; it simply plugs in-between the throttle pedal module and the ECM, and modifies the signal to create a positive correlation between your right foot and your trucks acceleration, and it has six levels of adjustment so you can tailor your driving experience to suit your preferences. The best part is because they leave no digital footprint inside the engine computer, there won’t be any effect on your trucks warranty, which is nice since most of the ½ ton diesels are new enough to be covered for a few more years.

Once your truck is out of warranty, there are options to add even more power as well, and nothing helps more than ECM tuning. Companies such as Edge, Superchips, and Calibrated Power have tuning options for the 5.0 Cummins , 3.0 EcoDiesel and 2.8 Duramax, and the 3.0 Powerstroke. And if you’re ready for even more upgrades, a few shops have built compound turbo systems for the 2.8 Duramax, but its transmission and connecting rods are a weak link. The 5.0 Cummins is showing the most promise. In the past few months, there have been some trucks with fixed geometry turbo upgrades, and the dyno numbers are very encouraging; one XD has laid down over 550hp and close to 850 pounds of torque at the wheels, all it will take are some tweaks to the high pressure fuel system to add even more to those numbers.

Which is best for you?

The answer to the million-dollar question is “it depends”. Many buyers will claim a 3/4 or 1-ton pickup is the only way to go, and for those folks who actually need a large rig to tow and haul, it makes sense. But, if you don’t need to move a backhoe, and you’d like to lessen the pain at the pump, a smaller diesel pickup can be just the ticket. Sure, they aren’t as fast as a gas V8, or as powerful as the larger oil burners, but they do offer a nice middle of the road, practical solution to a daily driven pickup, and usually have more creature comforts available. Either way, you’ll have plenty of choices…