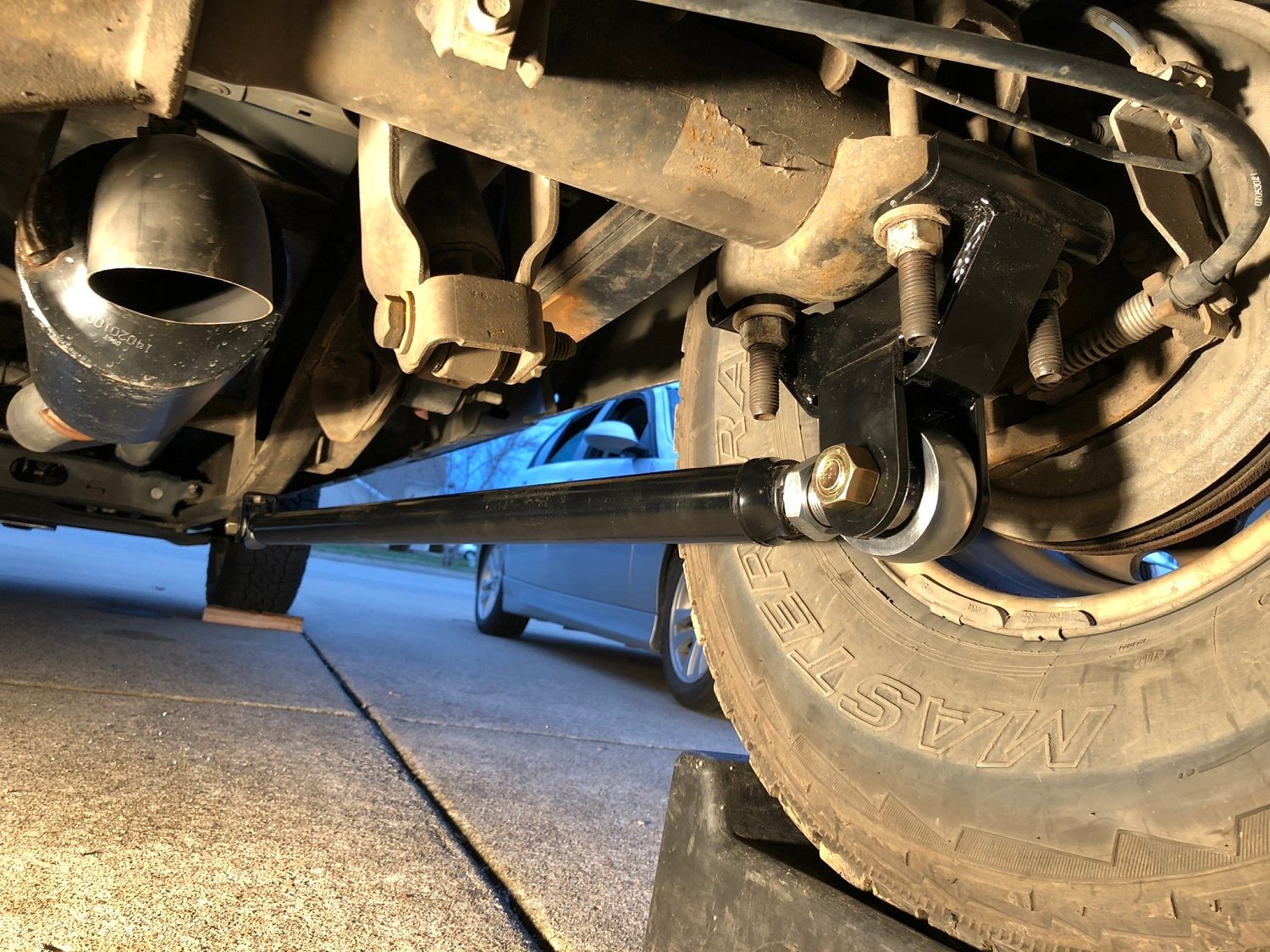 The Vicious Cycle of Power

You’ll notice a theme in my posts: I like to make trucks go faster. The downside is anytime you add more power, you’ll inevitably create several more problems as a result. It’s a vicious cycle of build, race, break, fix, and repeat. Today we’ll be discussing some of the problems tremendous amounts of diesel torque can create in leaf sprung suspension systems, and some fixes to those problems.

What the heck is a leaf spring?

Nearly every diesel pickup out there uses a solid rear axle with leaf springs, except for certain 4th gen Ram’s. While the 4th gen body style started with the 2010 model year, in 2014 a redesign to the 2500 implemented a 4-link coil sprung rear suspension which improved ride quality and suspension geometry, but the 3500 stuck with leaf springs, due to greater payload requirements. Likely first sketched on stone tablets by the ancient Egyptians and widely used in horse drawn wagons, leaf springs are no new technology. They are composed of several individual steel leaves stacked together, each around 2-1/2” wide, 1/2” thick, and about 60” long. As a pair, leaf springs have several jobs to do: hold up the weight of the truck and provide cushion, locate the axle laterally, and keep the axle from twisting under acceleration.

What’s the problem with 1,000-year-old technology?

As torque is applied to a solid axle, the pinion gear wants to climb up the ring gear as it turns. This force gets translated into a twisting motion on the axle tube. Viewed from the side, the front of the spring gets pushed up, and the rear gets pulled down. The problem is this causes the U-joints in the driveshaft to have improper angles and driveline vibrations. But as more and more torque is applied, and if you drive over an uneven surface, the built-up tension in the leaf springs can unload, the tires grab quickly again, and unload once more, all in rapid succession. This phenomenon is known as wheel hop, and the driver will notice a harsh, sometimes violent shake. If you experience wheel hop, your best bet is to lift off the throttle until things smooth out. If you ignore the shake and hop, you might find yourself replacing U-joints, a driveshaft, transfer case, or even differential parts.

How do the OEs fix it?

The best solution would be to take a page from Ram’s playbook and convert your leaf spring style suspension to a modern multi-link suspension system which separates the tasks of locating the axle and suspending the truck. A 4-link is different from leaf springs in every way. Four parallel links (sometimes called bars) allow the axle to move up and down, but keep the pinion angle from changing during acceleration. A fifth lateral link known as a panhard bar, keeps the axle centered in the frame, and two coil springs hold up the weight of the truck. Because every part does a different job, the whole setup works much better. There are no leaf springs to wrap, and correct link geometry will prevent wheel hop from happening. But in the real world, completely changing up the rear suspension isn’t practical, and could cost a ton. So, what’s the average guy to do?

Go to any sled pulling event in this country and I guarantee you will see a dozen sets of traction bars, as they are a simple and effective method of keeping the axle in check. To prevent torque from twisting against the leaf springs, a long metal bar with a pivot point on each end is attached to the lower part of the axle tube and runs forward toward the frame where the other end of the bar is anchored. This simple bar transforms the twisting motion of the axle into a linear force in the bar, which pushes forward against the frame, effectively killing all axle wrap and wheel hop. Generally, a “long bar” is best suited for applications like general street driving or sled pulling, but they can be found at the drag strip as well. They are simple to install, and no adjustments are needed; they just plain work.

Depending on your power level, and how much time you spend on the street, there are some options to consider. If you want the smoothest and quietest ride and rarely visit the race track, you may want to consider a set of traction bars which use a urethane bushing on each end. But on the other hand, if you participate in sled pull series, run drag slicks at the track, make tons of power, or launch your truck at every stop sign, you’ll want to step up so something a little beefier like the Longhorn Fab Shop professional grade bars. They’re made from massive 2” round steel and have a 3/4” diameter through bolt on a heim joint, which means you’re not going to break these bad boys, no matter what you throw at ‘em. On the other hand, if you have a lifted rig you do some serious off roading with, don’t worry, we’ve got you covered as well. BDS offers a traction bar called “Recoil” which has a built-in dual spring dampener and a fully floating pivot on the end. This means your high torque solid axle truck will be free to articulate and flex the suspension, but still won’t twist up the leaf springs or break anything due to wheel hop.

Why not just leave it stock?

It’s said we create our own problems. Adding tons of power and torque to your truck can be fun, in fact it’s addicting. The feeling of a quick launch or winning a sled pull is better than any drug. You just have to be prepared for the fallout. Any time you add power, you will run into more problems that need to be addressed. But as long as you understand what problems you are going to create for yourself, you can find the solution. Because at the end of the day, leaving a truck stock really is not an option.