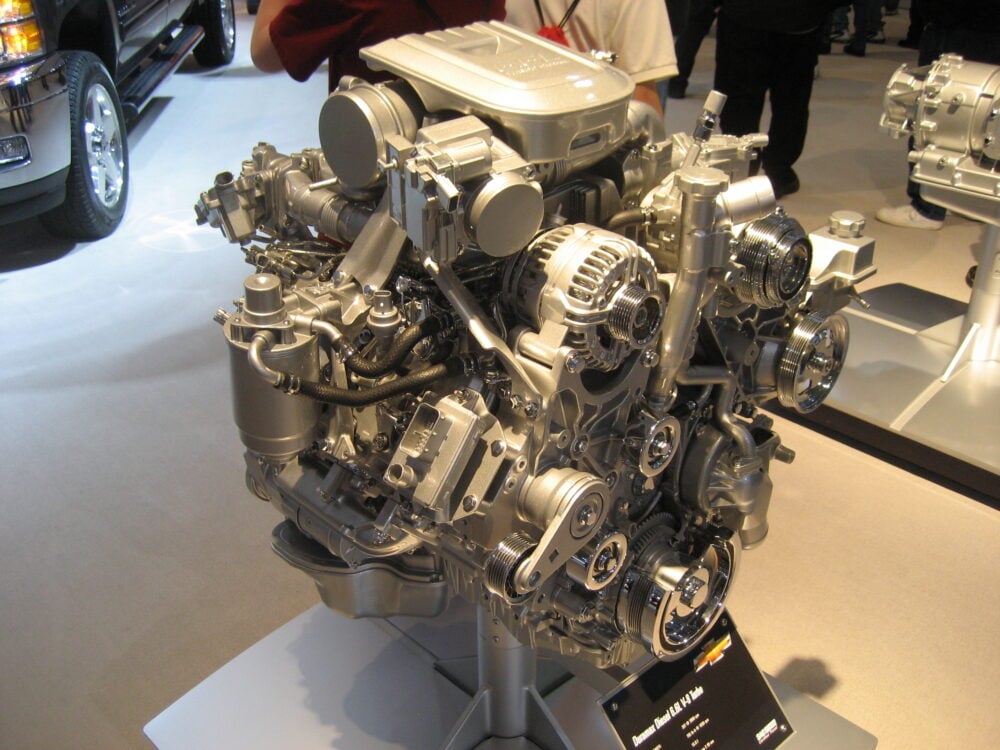 The Great Cycle of Speed

Life is cyclical. We see the same trends come and go, often years apart. But each time the trend comes back, things are usually slightly different. In the late 70’s and early 80’s, tightening emission regulations strangled power output of many large V8 engines, and American cars were fitted from the factory with catalytic converters and rudimentary forms of fuel injection to help control pollution, and minimize environmental impact. At the time, it was common practice for hot rodders to “delete” those newfangled systems, replacing them with old-school carburetors and free flowing glass-pack exhaust, because at the time, that’s how things were done. But as time went on and technology advanced, it became clear you could build lots of power but still keep those government mandated systems installed. Today you can even buy cars like a Dodge Demon making over 800 horsepower, complete with EFI and Catalytic converters.

To diesel guys, this story may sound a bit familiar. Back when 2008 model year trucks started rolling off the assembly line, they were equipped with some never before seen technology attached to the exhaust. Shortly thereafter, the aftermarket started figuring out ways to remove those items in the quest for more power and fuel mileage, and just like in the heyday of the smog era, it sort of became the go-to first upgrade, along with an intake and a tune. But as time goes by, we’re finally figuring out it’s possible to make good power and get good fuel mileage from a late model diesel while keeping all factory emissions systems intact. We’ll dive into how that’s possible, but first, let’s talk about some of the equipment that’s installed on our trucks, and what its purpose is.

We won’t get too deep into the science of burning fossil fuels and its environmental impact, but here are the basics: several byproducts of combusting diesel fuel come out of your trucks exhaust, and they’re considered by many to be harmful to the environment, cause global warming, and even health problems. The common offenders produced in a diesel are Carbon Monoxide (CO), Particulate Matter (the black soot you can see), Hydrocarbons (HC), and the most harmful, Nitrogen Oxides (NOX) which contribute to smog and acid rain. So, to keep these harmful compounds out of the atmosphere, diesel trucks come equipped with special equipment that causes chemical reactions and breaks down those bad compounds into harmless CO2 (soda fizz) and H2O (tears). Some of these systems have been around longer than others, and most trucks use a combination of all these systems. Let’s dive in and break down the who’s who of emissions equipment.

“DPF” or diesel particulate filter: This is the system everyone has heard of, and it came standard on every diesel pickup 2008 model year and newer. Its job is to trap particulate matter, or in common terms, soot, which is the black smoke you’ve all seen. Basically, it’s a filter that is installed in the exhaust system, and traps the soot produced from the engine. Just like an air or oil filter, it can get dirty and restricted. But this filter comes with a clever way to un-clog itself; you can almost think of a DPF as a self-cleaning oven. Whenever sensors in the exhaust stream determine its full, extra fuel is introduced to heat it to the neighborhood of 1,000˚ Fahrenheit and burn off the soot that’s accumulated. Depending on the truck and operating conditions, this cleaning or regeneration process happens every 300-1,000 miles usually and takes 10-20 minutes.

“EGR” or exhaust gas recirculation: This system has been present on gas engines for decades, and on diesels pickups for about 15 years now. It was first introduced on California emissions LB7’s in 2001, the LLY Duramax in 2004.5, the 6.0 Powerstroke in 2003 and for Cummins between 1996 and 1998 on 5.9 12-valves sold in California but went away until 2008 for all 6.7 Cummins nationwide. As its name implies, the EGR system taps into the exhaust, pulls out a small portion of burnt gasses, sends it through a cooler, and recirculates it back into the intake stream to be burned again. By mixing normal fresh intake air with a small portion of exhaust gas (5 to 15%), combustion temperatures will be decreased, reducing NOX output. The EGR system turns on and off throughout normal operation and is usually most active during steady state cruising.

“DOC” or diesel oxidation catalyst: This is one of the first components in the exhaust system after the turbocharger and is most like the catalytic converter in a gasoline powered vehicle. The cat heats up from the exhaust gasses and causes an oxidizing reaction which breaks down Carbon Monoxide (CO) and Hydrocarbons (HC) into much less harmful H2O (clouds) and CO2 (food for trees), but in addition the catalyst also decrease soot, which basically cleans up the exhaust gasses to help the DPF and SCR work more efficiently.

“SCR” or selective catalyst reduction: SCR is the latest addition to light duty diesel trucks. We first saw it used on the LML Duramax in 2011, the 6.7 Powerstroke in 2011, and in 2013 for the Cummins powered Ram. This system uses Diesel Exhaust Fluid, which is made from deionized water and urea. Technically derived from Ammonia, Urea contains no actual deer or horse urine as some suspect. A small nozzle sits in the exhaust system right before the SCR, and sprays DEF into the exhaust stream. The job of the SCR is to further break down Nitrogen Oxides (NOX) by spraying urea mixture into the exhaust and starting a chemical reaction, which spits out N2 (useless and harmless) and water.

Reasons Not to Delete

So now that we have the science covered, lets talk about real world application. Traditionally, the reason folks have preferred a race style exhaust is the thought their fuel mileage will increase dramatically, but that’s just not the case anymore. Modern emission equipment has been dialed in to the point that new Rams are getting 22+ MPG in 100% stock condition. For most trucks there just won’t be a significant increase in fuel mileage simply by eliminating emissions equipment.

The other popular misconception is that an emission intact exhaust system will restrict your horsepower potential, and its easy to see why. If you’ve looked underneath your truck, surely, you’ve spotted the massive space shuttle exhaust. One could easily jump to the conclusion that all that stuff will choke your engine, killing performance. But again, that’s not the case. Time and time again, tuners like Calibrated Power have shown that the stock exhaust systems will reliably support over 600whp, which is more than enough for most diesel truck owners.

But set aside myths about restricting power and killing fuel mileage, there are many other benefits to running “emission intact”. There’s the issue of getting your truck to pass an emissions test, which if you’re deleted, means you’ll have to reinstall a ton of parts (provided you haven’t sold or destroyed them already), tune your truck back to stock, and then drive to your local inspection station. Have you ever tried to install an EGR cooler on an LML? It’s not exactly a 20-minute ordeal. Just imagine doing 2-3 days of work once a year just to pass an emissions test, and you begin to get the picture. But maybe the least considered yet most important reason to keep your emissions system intact, is the warranty.

Clearly, removing your emissions parts from your very expensive truck will give the service writer at the dealership reason to turn down your warranty claim. But don’t think you can just reinstall your parts and the dealer wont notice. First, the techs at the “stealership” will be looking for evidence of tampering with the systems, but even if they don’t notice fresh wrench marks on bolts to the DPF, the modern ECM can’t lie. Your trucks computer keeps a log of each time it has been flashed, and the dealers scan tool will snitch on you. There is a digital footprint you simply cannot erase, so even if the truck appears to function like stock, they’ll know you had it deleted. So, if you can’t get better fuel mileage, keep your warranty, or pass an emissions test at anytime, why would you want to go through all that hassle?

So, Just Leave it Stock?

As always, tuning is the key to unlocking power, and luckily there are many solutions that can increase power without disturbing the emissions systems. You can get programmers from Superchips, Bullydog, and Edge, as well as custom tuning from vendors like PPEI or Calibrated Power. Many LML’s for example, are running around with 500hp with only a tune and a lift pump, and the 2015+ 6.7 Powerstrokes can reach almost 600hp with emissions intact custom tuning.

But what about hard parts? Diesel Power Products makes it easy for you to spec out your build with their 50-state legal performance parts. Nearly every part that increase air density is usually 50-state legal, like cold air intakes, intercoolers, larger intercooler tubes, and even some parts of the exhaust system like exhaust manifolds and up pipes, down pipes, and the exhaust system after any emissions components. By increasing airflow efficiency into and out of the engine, and cooling down the compressed air from the turbocharger, diesel fuel is more effectively burned, which leads to a decrease of harmful emissions. Some parts of the fuel system can be 50-state legal as well, like PPE’s dual fuelers, or even a lift pump from FASS or AirDog.

Emissions intact upgrades don’t stop with the simple parts either. If you want a serious bump in power, you can even drop in a larger turbocharger like a Fleece Cheetah or DT Stealth series turbo and still connect all the stock emissions parts. And, if a drop in single charger still isn’t powerful enough, now you can buy compound turbos kits from ATS that work with all the emissions parts.

So, the question is, once you’ve built and tuned your emissions equipped diesel, what can you expect? Believe it or not, these mods will actually reduce the stress on your emissions system. Adding compounds for example, will of course make the truck more fun to drive, increase torque and power, and will drastically lower EGT, but as a bonus, particulate matter is reduced, and along with it, the frequency of DPF regeneration, which means better fuel mileage. When you upgrade your diesel with emissions systems intact, the truck will run better than stock, pollute less, and use less fossil fuel. In some ways, it’s is better for the environment than a Prius or Tesla, and you can still keep your man card.