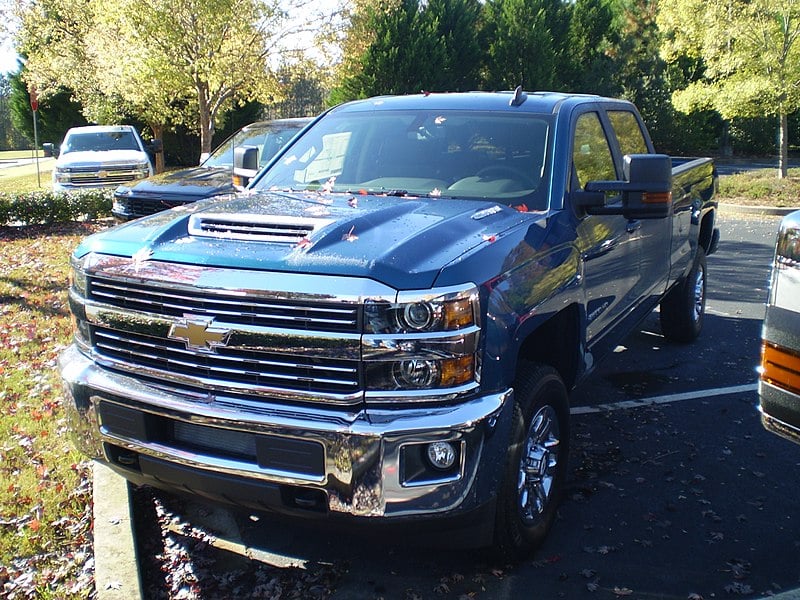 The Curious Case of the L5P

The L5P Duramax is the latest iteration of the Isuzu and GM jointly manufactured powerplant found under the hood of Chevrolet and GMC trucks since the LB7 was first introduced in 2001. Each version has been a 6.6-liter, 32 valve, iron block, aluminum headed, common rail injected, V8 turbodiesel, but there have been many updates and changes made along the way. Originally rated at 235 horsepower and 500 pounds torque (’01 MY LB7) the Duramax saw several bumps in power with each new generation. In 2004.5, the LLY made a healthy jump to 310 horsepower and 520 pounds of torque, followed by the LBZ’s 360 horsepower and 650lb.ft. of torque in 2006. When the emissions equipped LMM showed up in ‘08 it only saw a modest increase of 5 hp and 10 pounds of torque, totaling 365 and 660 respectively. Next up in 2011, the LML made a big leap forward to 397hp and 765 pounds of torque, 162hp and 265lb.ft. more than the LB7 made just ten years earlier. But not to be outdone, in 2017 GM totally flipped the script. They threw out the old recipe and gave us the L5P which made a stump pulling 445hp and 910 pounds of torque.

As soon as the specs of the all new powerplant were leaked, hot rodders were eager to get their hands on the baddest Duramax to date and see how far beyond stock it could be pushed, just as folks did in years past with the LB7, LLY, LBZ, LMM and LML. Huge gains in power can normally be had with nothing more than a quality tune of the computer, but our hopes were soon dashed when we realized the L5P would be much more difficult to crack than any previous engine. It all comes down to the ECM, or engine control module, the computer that runs the L5P. Sadly, intense security measures installed by GM prevent any aftermarket device from re-flashing the computer. In fact, some say it’s an impossible case to crack.

To find out why this new Duramax is locked down so well, you would have to be a fly on the wall during an engineering meeting in Detroit, or get inside the head of the corporate GM executives, but many speculate it has to do with reducing warranty claims, caving to pressure from the federal government to prevent tampering with emissions devices, or simply GM wanting to protect their intellectual property. Regardless of the reason why, how it’s done is much more interesting.

A key locked inside a safe with no combination

It’s a very technical problem, and this will be a drastic over simplification, but here’s what’s going on: each individual truck requires its own special “key” to unlock the door to the ECM and allow a re-flash to take place. The problem is that key is protected inside a “safe” by some special encryption called Diffie-Hellman 2048 and SHA-256. In order to crack the code and force your way through to unlock the ECM and allow aftermarket tuning changes, it would take tremendous resources (some say millions of dollars) and years of time for an army of computers to crack the safe and gain access to the key. But remember, each individual truck has its own combination to its safe, so the process would have to be repeated for every person wanting to tune their truck. On top of that, because new trucks have the capability of doing OTA (over the air) updates via LTE just like your smartphone, if GM ever detected tampering, theoretically they could overwrite any changes you’ve made, change the code to the safe and the key inside, and leave you out in the cold. Essentially, the experts say it’s impossible to crack the codes on a mass scale to perform a simple software only re-flash like has been possible on all previous generations of Duramax. While at 445hp and 910 pounds of torque is impressive, stock is never an option. Luckily the aftermarket is filled with some very smart, performance-minded individuals who have the tenacity needed to find a solution and give us the increase in power we’re all looking for.

If you can’t break down the wall, go around it

Rather than throwing a ton of resources at trying to crack a code that’s effectively un-breakable, there are a few other ways to get the desired result of more power. The first type of solution falls into the category of a “piggyback” or “inline” tuner. This kind of device has been around for quite a while and has a good track record. It consists of a wiring harness, a small microprocessor or computer, and in some cases, it will also come with a gauge display and switch for multiple power levels. An inline tuner plugs into certain sensors on the engine, intercepts the information normally sent to the ECM, makes some adjustments to the signal, and sends a new modified signal into the ECM. The basic premise is to fool the computer into delivering more fuel and air, therefore increasing power.

Power you can take to the Bank

While there are several inline tuning devices on the market, the Banks Derringer is the most comprehensive option for the L5P. It adds power much like any inline tuner, with dyno proven gains coming in at an additional 61 horsepower and 112 pounds of torque. But how it controls the power is what sets the Derringer apart from the competition. In addition to connections at the fuel rail and manifold pressure sensors, it also connects to the OBD2 port, to monitor how the additional air and fuel is affecting the powertrain. The Derringer watches EGT, and if things get a bit too toasty, it will automatically defuel to cut power, saving your engine and emissions system. It also watches for transmission slippage, and if any is detected, again, power will be cut. Safeguards are in place for engine coolant temp, compensations are made for altitude and fueling changes are made in each gear. Essentially, the power is increased, but in the safest manner possible. If you use your truck for a daily driver, hard work, and play, the additional 61hp and 112 pounds of torque is perfect for the majority of truck owners, especially considering the modest entry cost of $480. Plus, you can combine the Derringer with a cold air intake for even more power or add their iDash into the system to keep an eye on things.

What if you want to take it a step further?

In September of 2018, HP Tuners announced they had a hardware solution available for full custom tuning on the L5P. It took months and months of work, but they had an answer for the L5P for guys wanting to take their truck to the extreme. The process isn’t as simple as plugging in and flashing the truck, rather it’s an ECU Exchange Service, where you physically remove your computer and send it in. They will return to you another modified ECM which has been tweaked to allow calibration changes to be flashed in. From there, it’s up to you to find a tuner who is able to make the needed changes for more power, like the guys from DuramaxTuner who can raise the output (at the rear wheels) to a massive 550hp and 1,200 pounds of torque, while keeping all the emissions systems intact. Now granted, this is not an inexpensive proposition. The exchange/modification service by itself costs $2,500, and you still will need to pay for credits (permission) to flash the computer, the tuning tool itself, the TCM unlock fee, and then pay the person who is writing the custom tunes. When it’s all said and done, you can expect to pay around $5,800 for that gain in power. That is a substantial investment, but when you add up the cost of making 550-wheel horsepower with an earlier year Duramax, the L5P tuning costs become more palatable. On an LB7 or LLY for example, if you want 550rwhp, you’ll need to upgrade the turbocharger, intake, exhaust, tuning, and on top of all that, the transmission needs to be built to hold the increase in power. When you add up all the costs on that list, you’ll find the number far exceeds the costs for comparable power in an L5P.

The future is bright

They say speed and horsepower is addictive, and now L5P owners can get their fix just like everyone else. Whether you have a daily driver that needs a small kick in the pants, or an all out need for speed, thanks to the aftermarket, the newest Duramax has potential to be the gold standard of hotrod engine in the diesel world. At the time of writing, we’ve seen a handful of L5P’s come very close to the 600-horsepower mark, with the first limit being the turbine side of the stock turbocharger. But in the coming months, you can expect those numbers to steadily climb. The introduction of custom tuning has kicked off a land rush to see who can come out with hard parts for this brand-new engine. Spy shots of drop in turbo upgrades and compound turbocharger kits and larger injectors have already surfaced, as well as rumors of stronger connecting rods and pistons as well. I’ll wager by next year at this time, we’ll have seen the world’s first 1,000 horsepower L5P.