At the time of this newsletter, the sun has recently set on DPC 2013 and the smoke has cleared from the mountains of Colorado where the event has again taken place.  We had the privilege of sponsoring this event for the second year in a row as the Official Fuel Additive via our Fuel Bomb Diesel Additives line.  To say that the events and the results of this year’s events were predictable, would be a malicious lie.  And to say that the time spent with old friends and the opportunity to make new ones was awesome, would be an understatement.

As protocol has it, Monday marked the beginning of the event with registration and a welcome event.  This is a great time to really just talk with the contestants, other sponsors, and the Diesel Power Magazine staff to familiarize everyone with one another.  However, the first big shakeup of the event came when news that a member of Team General Motors, Shilo Ellingford, did not get his Duramax completed in time to compete. 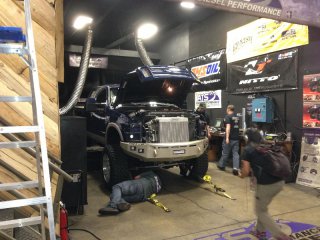 Day number two commenced bright and early with everyone meeting at 7am for some quick photographs at ATS Diesel and then off to the dyno competition.  In theory, dynoing nine trucks should be a relatively quick task that could be completed by lunch.  But when you’re strapping down trucks capable of this kind of horsepower and trying to squeeze every last pony out of their engine, it simply takes time.  By 5pm, all trucks had hit the rollers and proven their strengths, as well as their weaknesses.  Overall, Banean Woosley took home the honors with a pull of 1255.7 horsepower and 2063 lbs. / ft. of torque with his 2005 Dodge Cummins.

Wednesday morning started off with everyone’s favorite (insert eye rolling) event, the trailer obstacle course.  As the name implies, the contestants are to maneuver a trailer loaded with a Bobcat through a cone course that concludes with them backing it into a narrow cone “stall.”  Each contestant is timed and points are deducted for each cone hit, even though cone contact is typically applauded by the onlookers.  There are definitely two approaches to this event:  go for broke, in which cones WILL be hit, but speed is of the essence, and the other is that of sheer methodical maneuvering.  This year, strategy outplayed speed with Wesley Beech and his 2008 6.4L Powerstroke taking home the crown. 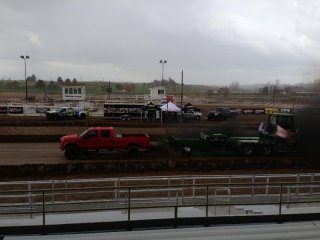 Immediately following the trailer obstacle course, everyone jumped right into the 1/8th mile trailer tow.  Again, as the name implies, this is an 1/8th mile drag race with trucks hooked to the same loaded trailer that they recently yanked around the obstacle course.  With rain looming in the forecast, the trucks were rushed through the race, given one opportunity to perform a piece.  In the past, this event has proven to be one of the most destructive to the drivetrain of these high horsepower trucks, and this year was no different with five trucks limping from the track (beaten but not completely broken).  Overall, victory went again to Beech with a run of 10.342 at 74.21 mile per hour.  It seemed as though Beech was a force to be reckoned with as he took two events in a row.

No green grass was to grow under the tires of these trucks, as they were lined up again at Bandimere Speedway for a standard ¼ mile drag race to be the final event of Wednesday.  Eight trucks were able to compete, only missing Tony Rizzi and his 2004 Duramax that sustained just enough carnage in the 1/8th mile race to take him out for the afternoon.  Overall, Woosley had the quickest time with an amazing 10.807 second at 129.4 mile per hour run for qualifying, but that would not lead him to victory.  Overall, Beech was the last man standing in this bracket style racing format, and gave him the runaway victories for the day.

Thursday morning started off with another early start as the drivers and trucks would fill up and head out on a gingerly, scenic 140 mile road trip that would test the vehicles for their overall fuel economy.  This drive took everyone to some of the higher elevations in Colorado and through a score of snow covered roadways, not necessarily the best things to judge fuel economy on, but a true test nonetheless.  Overall, Rizzi took home the price with his Duramax for best overall fuel economy.

Thursday afternoon brought upon the final Diesel Power Challenge event, sled pulling.  For those that have never sled pulled, there’s a lot more to it than putting the truck in four wheel drive and mashing the throttle; gear selection, line choice, acceleration, weight, and other factors are all extremely crucial in being the victor.  This year, Erik Clausen, last year’s DPC overall winner, stood at the top of the podium with his 2008 6.4L Powerstroke.  The most impressive pull, however, went to Tony Rizzi’s Duramax that managed to catch fire.

Overall, the win went to Wesley Beech’s 2008 Ford Superduty that swept Wednesday’s events.  But really looking at it, every single one of these trucks got the opportunity to compete in a once in a lifetime event that would gain them recognition.  Even the lowest point contender can still proudly say that he was able to compete with some of the best contenders in the industry, which is something that most cannot declare.  And we were proud to be there and support each and every truck, driver, sponsor, and Diesel Power Magazine, and look forward to the opportunity again next year!