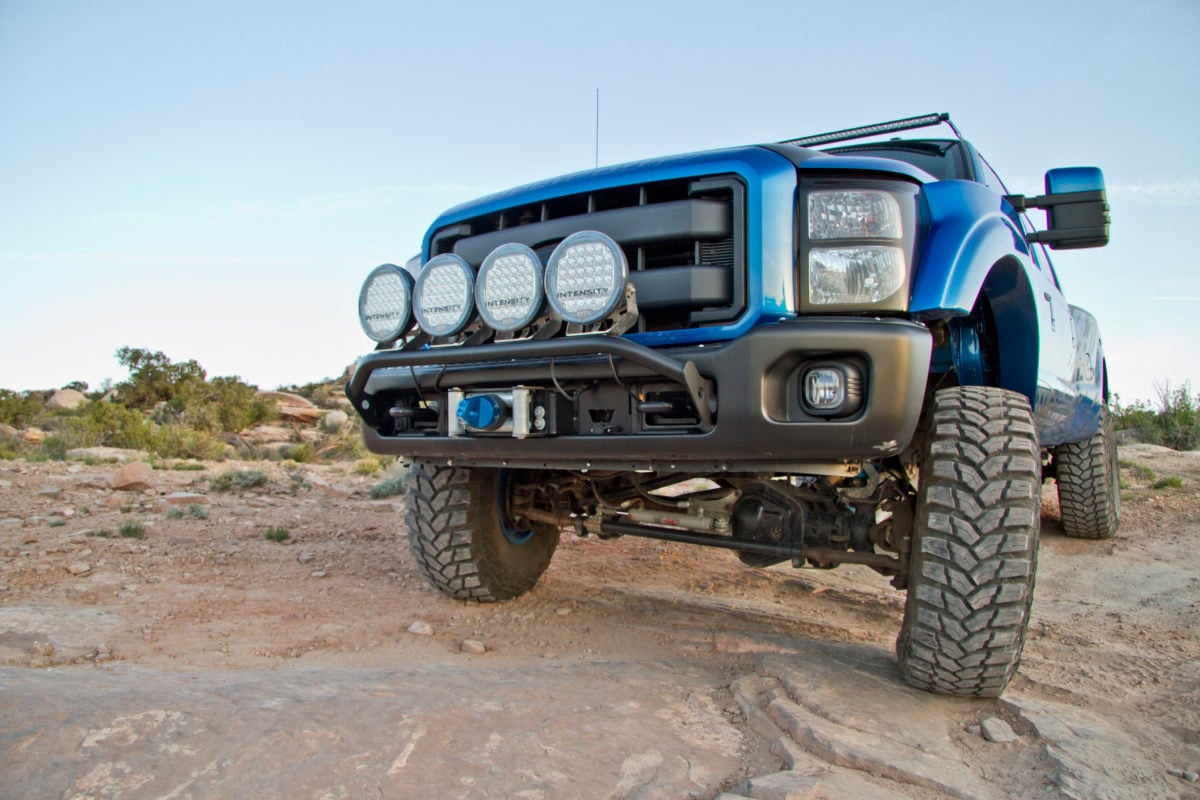 In case you missed it, we recently installed BD’s new Scorpion S467.6SX Turbo Kit on our 2012 6.7L Powerstroke, dubbed the Raptor SuperDuty.  This extremely complete kit eliminates the failure prone factory turbo (we’ve personally grenaded two of the stock chargers) in favor of a high performance Borg Warner unit.  We’ve now had some seat time as well as a recent dyno session and thought we’d give you our personal feedback.

First and foremost, lets cover the shortcomings of the stock turbo.  As previously stated, they are known to fail, and when they do, it happens without any notice, easily leaving you stranded.  Secondly, they simply don’t flow enough air, especially for any trucks even with the mildest of performance upgrades.  This causes excessive EGT’s (Exhaust Gas Temperature) and high drive pressures which can lead to blown head gaskets or other more severe head damage.

One thing that the factory turbo does provide is excellent bottom end response due to it being a Variable Vane Turbo (VVT).  There was obvious concern that we would lose at least some of that responsiveness, especially when towing, paired with our 40” tires and 4.30 gears.  Well, we can attest that BD did their homework, and much to our surprise, this massive S467.6SX turbo actually spools BETTER from take off compared to the VVT.  Further, our mid range and top end received a huge increase, creating an extremely smooth and linear power curve, especially when compared to the VVT that would flat line right in the middle of the power band.

And to prove our seat of the pants dynamometer, we strapped the Raptor SuperDuty down to the rollers and were extremely impressed with the numbers.  Since the last time on the dyno we’ve only changed the turbo and converted the tuning from an H&S MIniMaxx to an EZ LYNK Auto Agent with custom tuning from Kory Willis of PPEI.  With the 40” tires, we squeezed 541 rear wheel horsepower (RWHP) out of this truck, where previously we only put down 400 ponies.  And remember, this is all with a 100% completely stock fuel system.  A gain of 141 horsepower with new, more refined tuning and an upgraded turbo, that’s pretty impressive!

The next step to prove the potency of this turbo kit was to use the truck for what it was intended for:  towing.  Many would argue that the towing characteristics of the truck would be diminished because of losing the factory exhaust brake by upgrading to a non-VVT.  You can put those concerns to rest, as it became apparent that the majority of the factory braking is really from the transmission downshift and converter lockup pattern when in tow-haul mode, as the truck performed flawlessly, both ascending as well as descending any grades we threw at it with ease.

Now, since this is a review, lets discuss any negative impacts we experienced with the new turbo.  When towing, we found it advantageous to manually control the shift pattern in an effort to maintain higher RPM’s than what the truck wanted to naturally dive into, in an effort to increase boost.  There seemed to be a certain speed/RPM range where the truck would be “lugging” with too low of RPM, not creating enough boost, in turn creating a lack of power and increased EGT’s.  This wasn’t a major concern, just different.  Would a lower gear ratio or smaller tires alleviate this issue?  Yes, without a doubt, but also keep in mind that the majority of you don’t run 40” tires either.  But now lets get to the good news.  Before we made another ring and pinion change to lower gearing, we decided to reflash and force a transmission relearn, which causes the transmission shift points all to be reset, at which point, will watch pedal position, speed, RPM, engine load, and a zillion other factors, and change the shift pattern naturally.  Problem solved!  Yep, that’s all it needed, was to relearn how to shift with the new setup.

Overall, since the relearn, we can’t find a single shortcoming of the BD Scorpion Turbo Kit, not one.  It flat rips for daily driving, towing is a breeze, EGT’s are down, and its an all around fun truck to drive with this setup.  As an added bonus, it also gets rid of the odd noises that the stock turbo would make at take off and gives the truck an entirely new sound.  We couldn’t be more impressed, well done BD, well done.

If you’re excited to purchase one, or want to find out more information, see the kit on our site.

The proof is in the pudding, or rather the dyno. Check out the video: