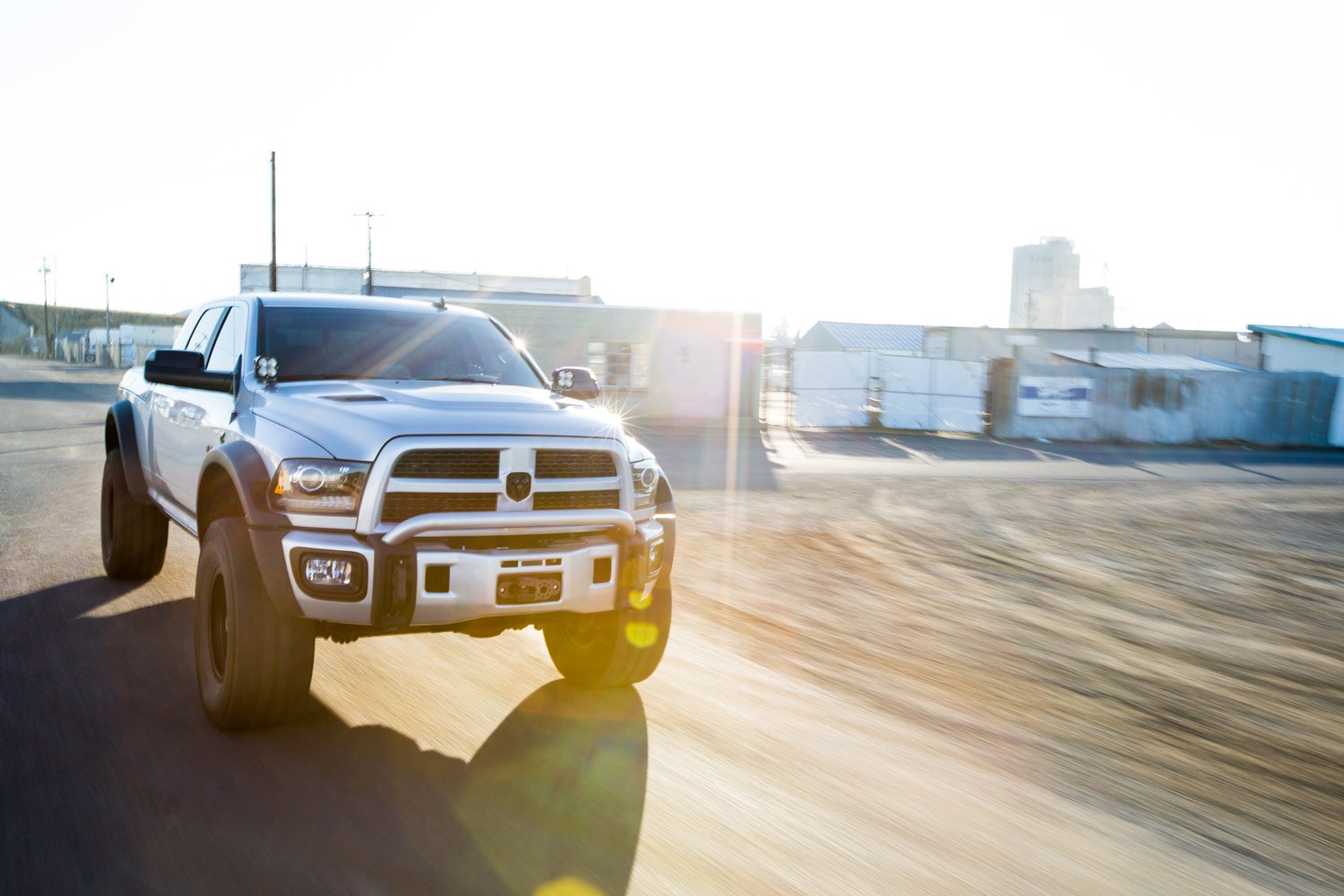 Why Your Cummins Deserves Upgraded Suspension and Steering

Alright, so you’ve got a heavy duty Cummins powered Ram. How’s it ride? How’s the steering? You know, just because it’s built to haul doesn’t mean it has to ride like a chuck wagon. Furthermore, did you know that for those looking to lift or level their truck, you can actually drastically improve the ride when doing this, instead of making it worse as many aftermarket lift kits tend to do? Well, its all true.

Before we dive into all of this, lets cover some of the basics and how the steering and suspension have evolved over the years on the different eras of Cummins (this discussion is specifically revolving around four wheel drive models). The Cummins powered Ram was first introduced with the 1989 model year and remained until 1993, commonly referred to as a “1st Gen.” The suspension on these trucks were comprised of front and rear leaf springs, and really very basic in nature. If you’ve ever driven a 1st Gen, especially with the original leaf springs that are most likely fatigued and flattened out due to wear and tear, you may have needed a back brace immediately following as you would have felt any crack in the road all the way to your teeth.

The next generation of Rams, dubbed “2nd Gens” were released in 1994 and were carried through 2002. This new body style, coupled with a revised 12 valve engine, also received a completely updated suspension. Here, we saw the advent of front coil springs in an effort to improve the ride. The switch over to coils from leaf springs also required the addition of front control arms and a track bar to secure the axle squarely under the frame. Model year 2003 saw the release of the 3rd Gen models with, again, an entirely new body style, engine, and transmission. While the suspension and steering were revised on these models, the basic overall design principle and geometry were relatively the same, just updated to fit the new “package.”

The first big change was actually to the steering in mid model year 2008. In order to best explain the change, lets first cover what the earlier models were equipped with. From 1994-2008, heavy duty Rams had a steering geometry that is commonly referred to as “Y-Style Steering.” In a Y-Style configuration, your drag link starts out at the pitman arm and then connects directly to the passenger side steering knuckle. Then, you have a center link that connects from the drag link over to the drivers side steering knuckle. In this configuration, the truck has a pivot point between the two wheels (see illustration).

In 2008.5 models, Ram made the switch to what is now deemed “T-Style Steering” that eliminates this pivot point by having the center link extend from knuckle to knuckle, and the drag link tying into it. This upgrade also features more robust tubing, with a substantially larger diameter, delivering even greater strength. Unbeknownst to many, Ram actually had a factory T-Style Steering for a short stint in 1998-1999 and abandoned it for whatever reason.

The question still stands, which is better? In our opinion, as well as most others, T-Style is the best option. Many would also attribute the pivot point on Y-Styles to the infamous “Death Wobble.” If you haven’t heard of this before, long story short, its an occurrence in which the front wheels are able to move independently of one another, steering towards each other, then away, resulting in a violent shaking of the entire vehicle. So yeah, Death Wobble’s a bad thing that you really don’t ever want to experience first hand. Really, the only negative of a T-Style Steering is that it results in a steeper angle of the drag link which can cause bump steer. Bump steer can best be described by the quick jerk to the right of your steering wheel after hitting a bump, and it stems from an excessive incline on the drag link.

In 2010, Ram released their next iteration called the “4th Gens” that received yet another face lift. However, in terms of the suspension, it was basically the same as the 3rd Generation Rams. But, and here’s a big old but…..for 2013, the 3500’s, and only the 3500’s, received an entirely new front end that many would argue took some serious design cues from the Ford SuperDuty lineup, which really isn’t a bad thing. The highlights of this upgrade were the abandonment of control arms in favor of radius arms and an entirely new steering geometry. The new geometry can’t really be deemed a T or a Y-Style as the drag link and center link are not attached to one another. Rather, the drag link comes in and attaches to the top of the passenger side knuckle and the center link attached towards the bottom of the knuckle. Effectively, this eliminates any pivot point but also drastically reduces the drag link angle (hence no bump steer). The following year, the 2500’s would also get the same new front end overhaul due to the overwhelming success the 3500’s had with it. And here’s where Ram sent a tidal wave through the heavy duty pickup market, as along with the new front end, the 2014 2500’s were also treated to rear coil springs. That’s right, you won’t find a single leaf spring on a 2014+ Ram 2500, its all coils, and this was done in a huge effort to improve the ride quality. With rear coils, Ram was also forced to now have rear control arms and a rear track bar, basically meaning the rear was quite similar to the front.

And here we are, now that you’re completely versed in the major design changes to the steering and suspension of the Rams throughout their lifespan, how can it be improved, and why would you want to? As we mentioned earlier, just because you drive a heavy duty truck doesn’t mean it has to ride like one. Further, just because you want to lift or level the truck doesn’t mean you have to compromise the ride. Why not make it better? We are huge advocates for installing upgraded components and kits that will not only deliver enhanced off road performance, but also huge gains for the majority of trucks used as a “truck.” Whether you haul a fifth wheel, load round bails on a flat bed, or just daily drive to work, there are upgrades that will absolutely deliver a noticeable, seat of the pants feel improvement.

If there’s slop in your steering, Red-Head Steering Gears makes upgraded gear boxes that will tighten everything up. BD-Power also makes steering box braces that will eliminate wandering from the sector shaft. If your suspension is rigid, we offer Carli Suspension kits that will not only level the ride, but make potholes and ruts disappear for the daily driver, or allow you to hit the sand whoops in the dunes if you so choose. When your ball joints are in need of replacing, don’t put the same junk back in that will just fail, Dynatrac and Carli both manufacture the toughest joints in the industry that you’ll never have to worry about again. And Synergy Manufacturing has super beefy steering kits that are built to take a beating and last a lifetime.  In short, if something can be replaced, there’s a bullet proof and better built upgrade on the market for it.

Lastly, we get the question on a daily basis, why don’t they install these types of upgrades from the factory, especially with the price tags on these trucks nearing the six digit mark? That answer is simple, if they did, these trucks would be even that much more expensive with the amount of markup they have in their own components. When you’re ready to upgrade your Ram’s suspension or steering, we’ve got the parts and the knowledge to get you the end result you’re after.  As always, if you have any questions about upgrades, feel free to give us a call at (888) 99-DIESEL, shoot us an e-mail at [email protected], or you can also CLICK HERE and check out some of our most popular suspension upgrades for your Cummins.

One thought on “Why Your Cummins Deserves Upgraded Suspension and Steering”