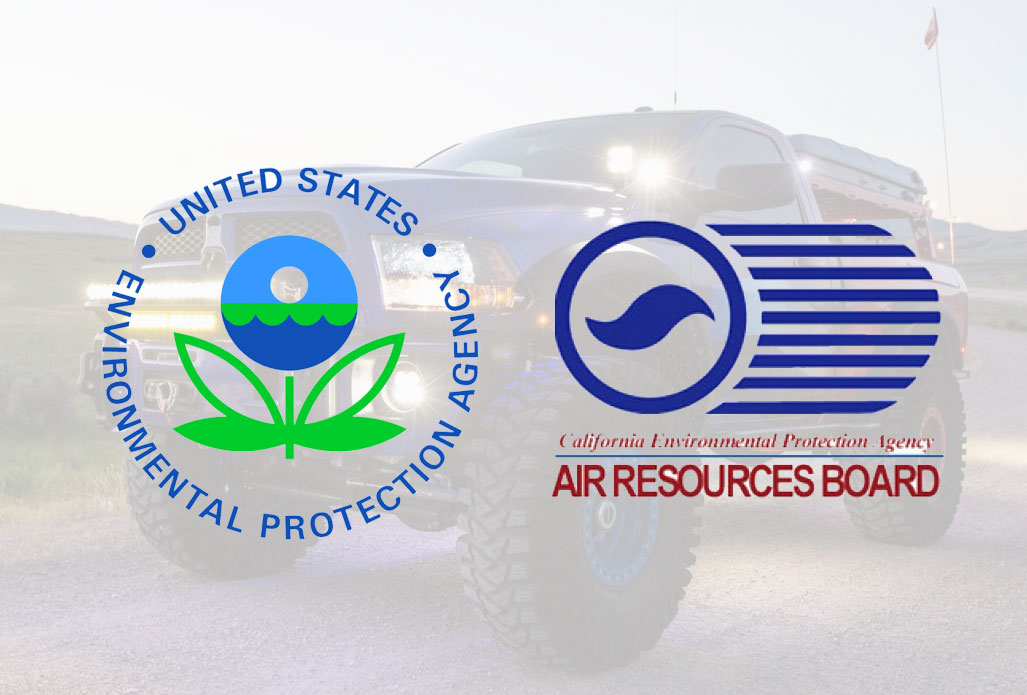 Emissions Regulations and How it Effects the Diesel Performance Industry

Emissions compliant – there we did it, we said the “dirty word” and got it out of the way right off the bat.  How do you personally feel about all of the factory emissions devices, such as DPF’s, EGR, urea injection, and so forth that have been forced to be installed on light duty diesels since 2007?  If you’re like some, it makes steam boil out of your ears and your eyes quickly gloss over.  But before we lose any of you and your computer monitor gets thrown through a window, lets talk about emissions compliance and how it effects the diesel performance industry and you personally.

We all know the story.  Back in 2007, all of the light duty diesels manufacturers were “forced” to add diesel particulate filters, exhaust gas recirculation systems, and so forth in order to meet newly adopted emissions regulations.  Prior to this, emissions regulations on diesels were really quite lax.  And just like they had before, aftermarket performance companies began to roll out upgrades for these trucks to include programmers (chips or tuners), cold air intakes, exhaust systems, and so forth.  At this same time, it was becoming easier than ever to extract a LOT of power from these engines with a few simple upgrades, meaning it was becoming substantially more popular due to the ease and cost of doing so.  No longer did you have to go through the painstaking and costly process of a complete engine build to knock down 600+ horsepower numbers.  Just throw a select few products and a Saturday’s worth of work and you’re there.  What this also means is that the popularity of diesel performance outgrew its britches in short order, gaining considerable attention, including that of the Environmental Protection Agency (EPA) as well as the California Air Resource Board (CARB) because most of these upgrades did not meet their qualifications.

And now, lets take a second to discuss this.  The EPA has an overarching sanction of the United States that vehicles must meet a certain emissions output.  Each individual state has the right to implement its own criteria above and beyond these minimums, and the state that is typically referenced for doing so is California, even though other states have adopted their own policies, such as Washington and Colorado.  This is most likely due to the fact that California has the largest and most structured (and often copied) emissions regulation system of all 50 states, which is called the California Air Resource Board, or CARB for short.  Kind of comical how its an acronym for a vehicle engine component that is basically extinct due to its inefficiencies, huh?!  Anyways, so now that the diesel performance industry is in the limelight, both in terms of general popularity, as well as governmental sanctioning bodies, a chain reaction soon followed.  Just as had been going on for over a decade within the gasoline powered performance industry, now the diesel performance industry began receiving pressure to produce products that met CARB regulations, at least as an alternative.  For an example, they could produce a product for sale in 49 states, and then another, similar product for California, or anyone really that wanted a product that met CARB standards.  In order to attain these qualifications, aftermarket manufacturers must pass a series of tests that certify their product does not produce any more than a predetermined, tolerable amount of emissions compared to a baseline, essentially a stock vehicle.  This process is extremely time consuming and costly to say the least, giving good reason as to why many manufacturers have been reluctant to comply.

The question still stands, how does this effect you?  Well, in several ways honestly.  On one hand, this trickle down effect will ultimately change the products you seek to purchase for your vehicle.  Lets take the number one example of this, H&S Performance.  H&S gained huge notoriety for their aftermarket tuning devices, including the Black Maxx, Mini Maxx, and XRT Pro line of programmers.  Their popularity exploded seemingly overnight because their line of tuners delivered exactly what many diesel truck owners were asking for, which was to completely disable and remove their emissions systems, to include the DPF and EGR.  Obviously, this kind of popularity also gained the attention of the EPA, leading to the demise of H&S, meaning you could no longer source their products.  Some would deem that H&S was made as an example to scare other manufacturers from following in H&S’ footsteps, and to some degree, it worked.

Now on the flipside, this effects consumers in another way.  For those that have upgraded their vehicles with any of the thousands of non-emissions compliant products, and have the vehicle registered in a county that requires emissions testing, it means that you will typically not pass this test with the upgrades installed.  In order to pass, you must remove whatever product it is prior to testing, run the test, and then reinstall.  In some cases, this is as simple as reprogramming your tuner, which can take but a few minutes.  But in other cases, it could mean reprogramming, changing out your exhaust, intake, or maybe even swapping a turbo (or more).  This extent could easily lead to a weekend’s worth of work for the change.  And now, lets really think about this for a second, is this really the point of “testing?”  As with any type of testing, it’s a sampling to ensure the overall results of a large group.  The reasoning to have a test in the first place isn’t to have you merely pass the test, but to maintain those results all of the time, right?  And here in lies our point to this entire article, this is exactly the reasoning as to why most of the larger manufacturers are going through the process of making their products meet CARB, or other, regulations.  Many consumers are frightened off, for lack of a better term, from upgrading their vehicles due to the time it takes to retrofit their vehicles for emissions testing or concerns over legality, in general.  But if the products are CARB approved especially (since CARB has the strictest rules of any state), you can roll into an emissions test with your tuner turned to “destroy” and you’ll pass with flying colors, presuming you don’t have any issues elsewhere.

Does all of this mean the end of diesel performance as we know it?  No, absolutely not, its just a different train of thought.  Instead of relying on throwing a ton of fueling to increase the power, it relies on getting the right mesh of fueling, airflow, timing, and so forth to create a harmonious effect.  If we simplify this down to probably the most basic of engines, lets use the Cummins 12 Valve as an example.  It would be comparable to the difference between just removing the fuel plate, versus throwing in a #8 fuel plate, advancing the timing a little, and throwing on an S300 turbo of your choice.  Without a doubt, the second option will produce more power, be more efficient, and honestly make the engine live a long, happy life.  But in the case of modern diesels, its merely the difference of more in-depth tuning with the option of some mechanical upgrades.

So when it comes time for some upgrades, how do you know whether they are emissions or CARB compliant?  First of all, numerous products are actually completely exempt, meaning they are deemed as having no impact on emissions.  Exhaust upgrades would be an example.  Depending on what model year of truck you have, you may or may not have various emissions devices installed inline the exhaust.  As long as your exhaust upgrade starts after the catalytic converter, DPF, and so forth, you’re good to go.  However, for things like cold air intakes or programmers, at least in California, they would require what is known as a CARB EO, or California Air Resource Board Executive Order.  This executive order is a number, typically looks something like D-123-4, which is a reference number stating that this particular product has passed testing and meets CARB standards.

Overall, we feel that all of this is a move in the right direction.  Sure, back in 2007 when these emissions devices were first being installed on our expensive trucks they were failure prone and destroyed the fuel economy, no one can refute that.  The dealers were plagued with constant negative feedback from customers coupled with update after update from the OEM’s trying to rectify the issues.  That being said, the OEM’s now have a decade under their belts with fine tuning the systems and quite honestly, have made huge strides in improving the dependability and efficiency.  This coupled with a decade under the belt of the aftermarket performance industry to TRULY understand these systems, has created an environment in which we can have the performance we’re after while maintaining complete emissions compliance.  Diesel performance is an industry that is alive and well and we look forward to what the future has in store.  If you have any questions revolving around all of this, feel free to give us a call at (888) 99-DIESEL or shoot an e-mail to [email protected] and we would be happy to assist.