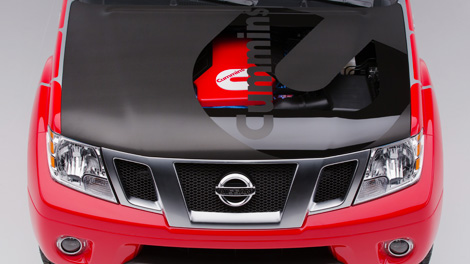 Prior to building full production vehicles, auto manufacturers build concept vehicles to not only verify the concept’s ability to meet its intended purposes, but also gauge the target market’s reaction.  They will either take an existing production vehicle and then highly modify it, or build from the ground up to create a potential market sensation (or at least they hope so).  More times than not, these vehicles are built off of trends that are occurring in the aftermarket so suit relatively finite audiences.  Because of this, these concept vehicles rarely see full production, but if enough interest is generated, full scale manufacturing will ensue.

Over the years, we have seen our share of concept vehicles that should definitely stay a concept, but every now and then, one of them stands out that peaks our interest.  Here are some of the vehicles that have recently gained our attention. 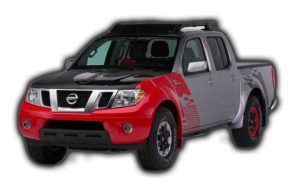 2010 marked the beginning of a research partnership between Nissan and Cummins to determine whether Cummins was a good suit for Nissan, and vice versa.  Most are aware of the first vehicle that will go into production as a result of this, the Nissan Titan XD packing a 5.0L Cummins.  But also as a result of this partnership, is the Frontier Diesel Runner project truck.  In short, Nissan shoehorned a 2.8L Cummins into a 2014 Frontier Desert Runner edition that is impressive to say the least.  Nestled behind the Cummins is a new eight speed automatic transmission to support the 200 horsepower, 350 foot pounds of torque generated by this 2.8L engine.  While the 200 horsepower may not seem abundant, one must consider the weight of the vehicle, as well as the output of its rival, the Ram EcoDiesel at 240 horse. 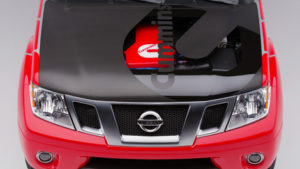 To showcase the Cummins transplant, Nissan got very creative with building a transparent acrylic hood that would be stellar on production models for those that are relentless in keeping their engine bay clean.   Nissan even topped off the concept truck with a set of 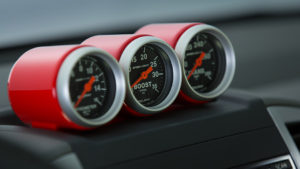 Autometer pyrometer, boost, and transmission temperature gauges mounted securely on the dash.  With aftermarket support to build an adequate offroad suspension coupled with engine performance modifications, this could be a really cool little truck. 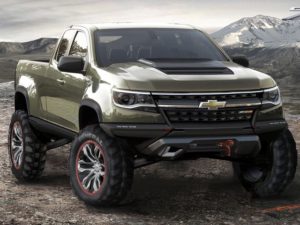 There are rumors that GM will release an updated version of the previous ZR2 packag, last seen in 2005 model years with the ZR2 equipped Blazers.  But what is ZR2?  This was an appearance and performance package that GM made available from 1994 through 2005 on their line of S-series pickups, Blazers, and Trackers in various forms throughout the years.  And we must admit, GM made this substantially more than a mere appearance package as we have seen other manufacturers, GM included, do with custom package groups.  Skid plates, upgraded tires and shocks, wider track width, more ground clearance, lower gear ratio, and more were all parts of this package that truly helped the performance of these vehicles off road.  True, you wouldn’t take one in stock form through King of the Hammers, but for the average Joe, it was a decent pickup.

Fast forward ten years since we last saw production of the ZR2 and GM has publicly released the Colorado ZR2 concept.  Initial photographs of the Colorado concept are very promising.  Factory winch, King reservoir shocks, and a wide stance are very apparent, but wait, what’s that badge on the hood…..Duramax?!  That’s right, a 2.8L Duramax diesel engine resides under the hood of this creature.  The little 2.8L is slated as having 181 horsepower and 369 foot pounds of torque, which is nothing to write home about, but the variable geometry turbo will definitely assist with power throughout the entire RPM range.  With the right gearing and tire selection, coupled with hopefully at least a six speed automatic transmission, this truck has potential to at least be “peppy,” but is unlikely to cause whiplash.  Either way, this concept has a seriously aggressive appearance and would be a great addition to GM’s existing lineup.