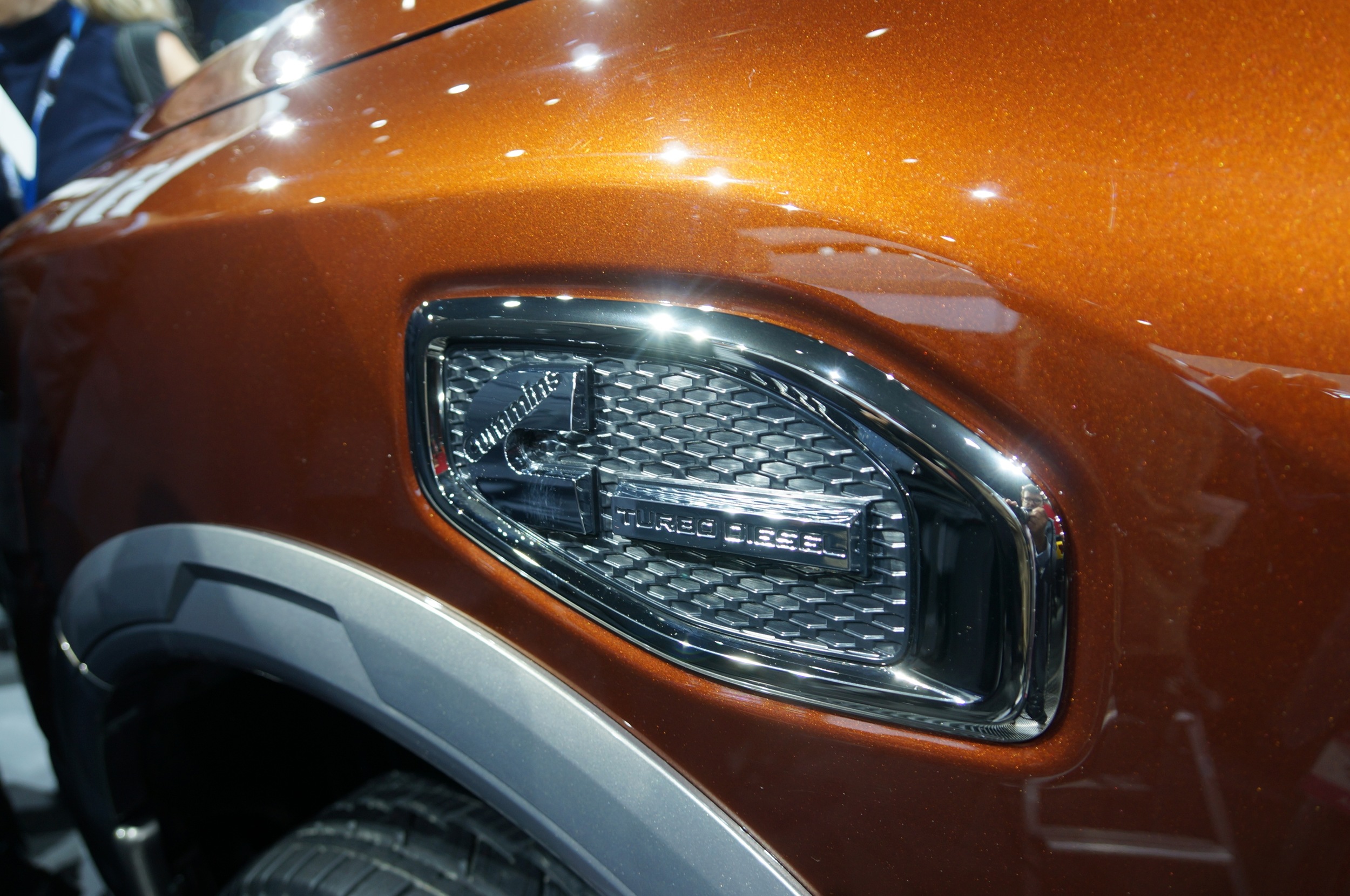 It’s “officially official,” announcing the release of the 2016 Nissan Titan XD boasting an optional 5.0L V8 Cummins, slated to be available to the public around the fourth quarter of 2015.  This news is probably no big surprise to anyone that follows automotive blogs and forums, but until now, it has been mostly hype, without any type of firm deadlines or major details.  The unveiling by Nissan at the 2015 International Auto Show just made this a very attainable reality. 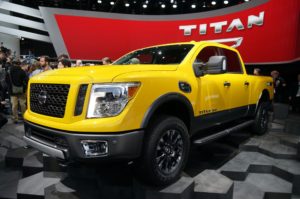 Along with setting a timeframe on availability, Nissan was finally able to release specific information about this new-to-market Titan XD to the public, so let’s dive into it.  First and foremost, the Titan XD is not a trim package of the standard Titan, but rather a completely different beast.  While their newly redesigned aesthetics are nearly identical between the XD and non-XD, the skeleton of the XD is completely upgraded to be a perfect marriage with the new available power plant.  The XD model is designed to fill a void between the lighter duty 1500 series models, and the 2500 and 3500 models.  They are looking to grab the attention of the individuals that covet owning a diesel, but don’t necessarily need the full time capability of a heavier duty model.  And with a name like Cummins backing them, how could they go wrong? 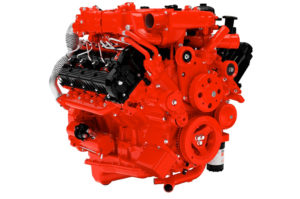 Now, what everyone has been waiting for, specific information on the new engine, the Cummins 5.0L V8.  That got three of the details out of the way, it’s a Cummins, it has eight cylinders, and it has a 5.0L displacement, but we’ve known that information for some time now.  This engine is rated at a competitive 310 horsepower and 555 foot pounds of torque.  Now, when we say “competitive,” yes, we realize that the Big Three are in an ongoing horsepower battle where they are seeing above 800 foot pounds of torque, but let us remember just ten years ago, to the 2003-2004 model year Rams.  This model of 5.9L Cummins delivered what was considered to be an impressive 305 horsepower and 550 foot pounds of torque.  How many of us are still driving this model year range of Cummins?  Probably quite a few. 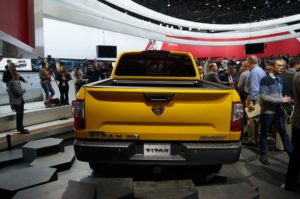 The fueling side of the equation is handled by none other than the trusted Bosch name.  Cummins has used Bosch for many years, so it is of no surprise that they once again embarked on this build together, with Bosch handling the bulk of the HPCR (high pressure, common rail) fueling.  Cummins first began using an HPCR type of system in the American light duty diesel market with the release of the 2003 Ram.  And while there may have been some speed bumps in some of the earlier applications, nearly all of these short comings have been overcome and all of the Big Three have been utilizing some form of an HPCR system for years. 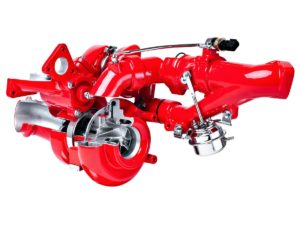 Without the proper turbo configuration, even the most advanced diesel will likely fall flat on its face.  And we must say that Cummins did their homework with the latest member to the Holset family, the M2, built exclusively for use with this engine and truck combination.  The M2 is a two-stage turbo system, designed to reduce turbo lag throughout the entire RPM range, utilizing a high and a low pressure turbo, featuring a patented Rotary Turbine Control.  In general, this system utilizes a small turbocharger for low air flow requirements, and a larger turbo for higher, similar in principle to what the aftermarket has been doing for years.  In contrast, however, this system incorporates a new rotary valve that acts as a high pressure turbine bypass and a low pressure turbine wastegate, and also works with the exhaust gas recirculation (EGR) system.  For those of us that are most concerned with turbo efficiency, this valve basically opens up as airflow increases to push more air to the larger turbine, and somewhat bypassing the small turbine, so that airflow is not lost in a bottleneck of the smaller turbine.  Overall, the smaller turbo will continue working at the same efficiency throughout the RPM range, because it is only being fed so much air, and the rest is being dumped to the larger charger. 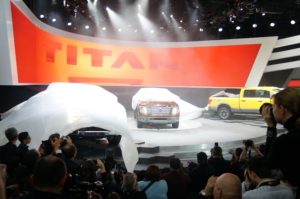 In order to help the 5.0L shed some pounds for the Titan XD, Cummins opted for a block built from Compacted Graphite Iron (CGI), which is actually stronger AND lighter than traditional iron.  Further, aluminum alloy heads were deployed, and while there is a substantial weight savings here, we all hope that the use of aluminum heads on an iron block does not result in notoriously blown head gaskets as we have seen in other applications.  Nonetheless, this CGI block will not only reduce the weight, but coupled with the dual overhead cam design, will also drastically reduce typical “diesel clatter” that Cummins are typically known for. 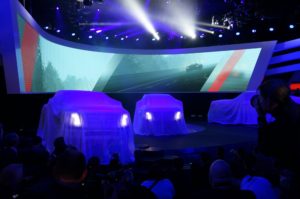 Like all other current diesel pickup applications, the Titan XD features an advanced emissions control system to keep particulate matter at a minimum.  In order to make the system as efficient as possible, not only is a diesel particulate filter (DPF) used, but also a selective catalyst reduction (SCR) system to keep active regeneration cycles at a minimum for optimum fuel efficiency. 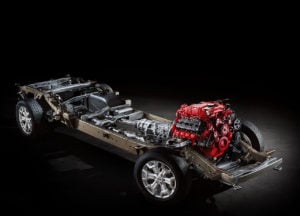 Behind the V8 Cummins will reside a six speed Aisin automatic transmission.  The six speed should assist in keeping optimum RPM’s for not only towing, but also fuel economy and general driving.  The Titan XD model will be available in two wheel drive and four wheel drive models, and the four wheel drive models will receive a newly designed transfer case specific for this new breed of vehicle. 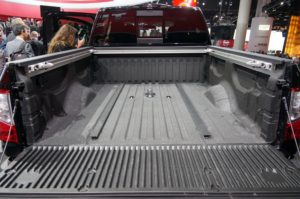 A major concern for many Cummins advocates was that of the Nissan’s ability to be worked.  The fear was that the new Cummins power plant would be derated to match the then-current payload and tow capacity of the Titan.  Fear not!  The Titan XD possesses a 12,000 pound tow rating, 2,000 payload capacity, and even meets the new SAE J2807 standards.  To further ease in this demand, the XD has numerous optional features to truly equip it as a tow-ready truck.  Such features as integrated brake control, trailer sway control, tow/haul mode, and downhill speed control have become somewhat the norm for the three quarter and one ton market, so why shouldn’t the Nissan have them?  How about an integrated gooseneck hitch?  That’s right, a Nissan with a factory gooseneck!  And to keep an eye on what’s going on around your truck and your trailer, the XD has an arsenal of optional cameras that’ll make you think you are in the Fort Knox security office.  When you opt for the RearView Monitor with Trailer Guides and Around View Monitor, you basically have a birds’ eye view of everything going on around you.  Gone are the excuses that you didn’t see your kid’s bike laying in the driveway or the car in your blind spot.

As previously stated, the standard Titan, and the Titan XD each have their own unique make up, making the XD version a much more robust package, truly designed to harness the potential of the powertrain.  The heavier duty model even features a unique fully boxed frame that was stretched roughly twenty inches.  The front suspension is comprised of a double wishbone design featuring an American Axle 9.25” front end.  Out back, a set of heavy duty leaf springs are adjoined to an American Axle rear end with a 3.5” axle diameter and optional Electronic Locking Differential.  For reference, GM’s 9.25” IFS front end has been in use since 2001 and still being used to this day, and early third generation heavy duty Rams featured a 3.5” axle before opting to go to a four inch.  What this means to you, is that it should provide confidence in knowing that the axle assemblies have without a doubt been upgraded to withstand the potential of this complete package.

And for those truck owners that like to get a little mud on the tires to get to their favorite fishing hole or camping spot, Nissan has not forgotten about you.  They have added such off road performance features as Hill Descent Control, Hill Start Assist, and a Brake Limited-Slip Differential.  And to top it off, they have even included a gauge to calculate your pitch and roll angles to keep you out of hairy situations.  Or, if you’re like some people we know, you’ll use the gauge adversely to see how FAR you can actually get the gauge to read, possibly resulting in a rollover anyways.

Only time will tell how well the new Titan XD will fair. Overall, it seems they have made very wise choices in the selection of equipment to ensure its longevity, now we just need to see how well each piece jives with one another over the long term.  Either way, its got a diesel, available four wheel drive, and a bed, so it definitely has our interest!

If you want more information or are interested in ordering the new 2016 Titan checkout the 2016 Nissan Titan Homepage.

Here is a video from the launch at the Detroit Motor Show 2015: