While the name may sound familiar, H&S Motorsports offerings are very different from the programming magic that H&S Performance produces.  H&S Motorsports has been part of an ongoing project for the team at H&S Performance to develop a division that focuses itself on the development of cutting edge hard parts for late model diesels.  No engine tuning or programmers for the team at H&S Motorsports, they leave that for their counterparts at H&S Performance.  H&S Motorsports has delved primarily into the realm of fueling via producing cutting edge products that utilize a new train of thought.  A great example of this would be the Stroker Common Rail Injection Pumps for 5.9L and 6.7L Cummins.  Due to some forward thinking, they were able to steer from the normal protocol of boring the FCA (Fuel Control Actuator), porting the gear drive, and modifying a few of the internals to 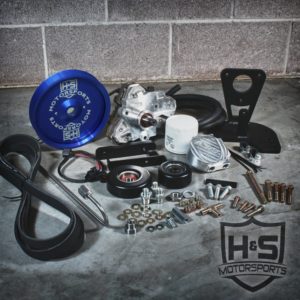 flow additional displacement.  Instead, they leave all of this alone and do as the name implies, “stroke it.”  Old school gas powered guys and gals will know exactly what we’re talking about here.  H&S Motorsports takes a brand new Bosch injection pump and merely swaps out the stock cam with their own revised version that provides additional lift to increase the fuel output by 30%.  This simple upgrade to the pumps will deliver the fueling the truck is after without having some of the negative side effects of other pump modifications.

The line of Stroker pumps is just the tip of the iceberg, though.  Another industry first is their line of dual CP3 kits that do not require a separate, standalone controller.    Rather, the customer must have an existing H&S Performance tuner (XRT Pro, Mini Maxx, or Black Maxx) and simply update the tuner with the latest H&S tuning designed for their dual pump kits and DONE, the ECM will do the rest!  These kits available for 2011-13 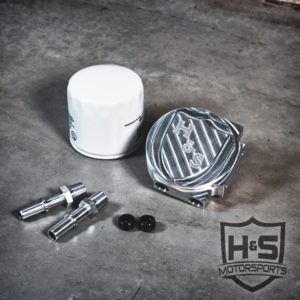 Duramax and Powerstroke trucks also utilize a BRAND NEW Bosch CP3 on all kits, not a remanufactured unit like most of the competition.  But wait, don’t these trucks have CP4 injection pumps from the factory?  Yes, however, the CP4 is a relatively new concept by Bosch that has not yet proven itself, as the CP3 has, and parts availability for the CP4s are scarce, not to mention the cost is outrageous!  Now what the truck is left with is the original CP4, as well as a brand new Bosch CP3 pump to deliver the fueling.  And if the truck somehow requires even more fueling than that, one of the previously mentioned Stroker pumps can be swapped out for the CP3 and you’ve got fueling to support nearly any horsepower level. 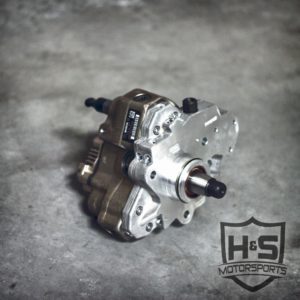 H&S Motorsports didn’t stop there!  How about an external wastegate kit specifically designed for the 6.4L Powerstroke to cure its plaguing drive pressure issues.  These kits bolt in place with vehicle specific adapters and includes a Turbosmart Comp 40mm wastegate that will alleviate excessive pressures as they build within the heads, and has even showed to deliver gains of up to 30 rear wheel horsepower.  Another exciting release is the Fuel Filter Conversion Kit for 6.7L Powerstrokes that eliminates the need to purchase the EXPENSIVE factory fuel filters.  This conversion adapts the factory filter bulk head to accept a standard WIX brand filter for cost effective fuel filter changes that won’t break the bank.  As an added perk, the supplied housing doubles as a fuel distribution block for trucks running dual injection pumps, which is why this kit is also supplied with one of the H&S Motorsports Dual CP3 kits for Powerstrokes. 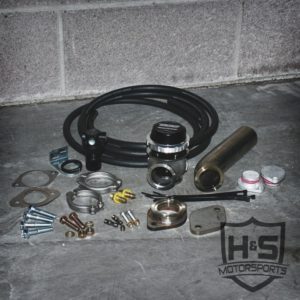 As demonstrated with the above new products, and many more on the way, it is quite evident that H&S Motorsports, coupled with their counterpart, are out to conquer the diesel industry with their forward thinking that has brought the company to where it is at now.  Be sure to keep an eye out for even newer released from H&S Motorsports that will continue paving the way for this industry.