Most people are familiar with a Swiss Army Knife. You know, that little red knife that seems to have a fold out tool for every job you can think of (do you really need a tiny fold out spoon in your pocket?!). Well, for most of us, probably not, but hey, why not. Now, when you think of a truck, your truck for instance, what’s the first thing that comes to mind? Hauling your travel trailer on the weekends or maybe its merely idling in traffic on the way to work? Why couldn’t your truck be more like a Swiss Army Knife? Trucks over the years have progressed in so many facets that it would be nearly impossible to make a list, but in general, each truck is initially built with a primary purpose, towing.

But what about a truck built specifically to do so much more? A truck that can kill it off road just as well as it can tow a 40’ gooseneck, get your kids to soccer practice, or even be a show-stopper all at the same time? This, inevitably, is the Swiss Army Knife truck. Some may remember a previous build of ours, dubbed the Raptor SuperDuty which was built on the platform of a 2012 Ford F-250 Crew Cab, Short Box powered by a 6.7L Powerstroke. For this particular build, we took many styling cues from the acclaimed Raptor, but then made it more capable than a Raptor in every way. Well, we did it again, introducing the RSD2.0, built on a 2017 SuperDuty platform.

If you’re anything like us, you like your truck a lot, maybe even love, or possibly obsessed is a better expression, thus you want to do everything in it. Unfortunately, in factory form, it doesn’t lend itself to be able to do everything, or at least very well. We’ve found that the biggest limiting factor of any light duty diesel truck is the suspension. As previously stated, these trucks are intended to tow as their primary purpose, so the suspension is tailored around that, but this narrow minded approach truly hinders your truck’s capabilities and overall ride quality for even your daily commute.

As the world’s largest supplier of diesel truck specific suspension upgrades, we have numerous choices when it comes to build our in house marketing trucks. For the Raptor SuperDuty 2.0, as we did with its predecessor and many others, we opted to upgrade with a brand we have relied on for years, Carli Suspension. For those of you who’ve been living under a rock and haven’t heard of Carli Suspension, let us quickly debrief you. Carli Suspension, located in Lake Elsinore, California, could be classified as a niche suspension company that’s been making some big waves in the eight lug marketplace since 2003. Their focus is to drastically improve the ride quality, capability, and durability of your truck tailored specifically for how you use it by offering varying levels of suspension kit and component offerings. What you won’t find from Carli are systems only designed to lift a truck, that’s not what they’re about. What you will find are components and full systems that will absolutely improve your truck in every way, while maintaining its full ability to tow at maximum GVWR. If you’ve got a Ram with failed ball joints and you keep replacing them with your local auto parts store’s offerings, Carli has lifetime guarantee ball joints that will truly last a lifetime. If you’re looking to fit larger tires and smooth out the ride in your Cummins for your commute to work, Carli’s got you covered. Or maybe you want to race the Baja 1000 in your Powerstroke….yep, Carli’s got a kit for that too. By having strategic relationships with companies such as Deaver Springs, King Shock Technology, and Fox Shocks, Carli is able to bring only the best offerings to the table. And by ensuring that every one of Carli’s components are built in their facility, you’re getting nothing but made in the USA quality that has an ease of installation simply unparalleled in the industry. 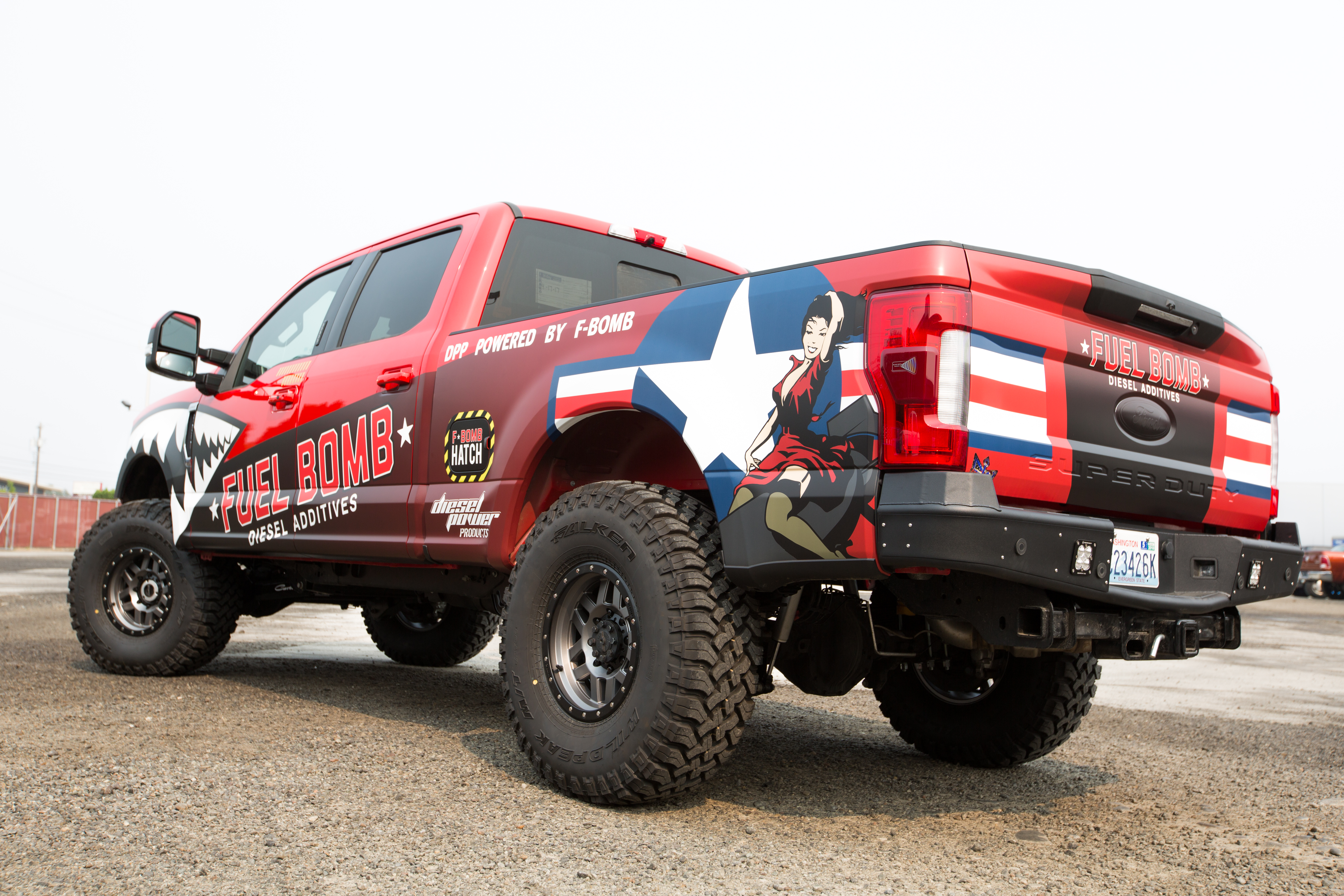 Now getting back to the RSD2.0, before we even had the new truck in our possession, we had already begun mapping out the build details, comparing how the original version was built, and how we could make it even better for its intended purposes. Overall, we tend to prefer less overall lift height accompanied with gobs of wheel travel, and tires typically in the realm of 40” diameter. After consultation with our friends at Carli Suspension, it was deemed that we should be able to accomplish this with one of their 2.5” lift systems in tandem with some creative fender modifications. On the previous RSD, we had opted for one of their 4.5” systems, specifically the Coilover 2.5 Bypass Kit, but now looking to keep an even lower overall lift height. At the time of the Raptor’s phase one of suspension upgrades, Carli was in the thick of rigorously testing and releasing kits for the redesigned 2017 Ford platform. And in traditional Carli form, this means not only finding what physically fits on the truck, but what truly lives up to the Carli name in terms of performance. After further review with Carli, we opted for one of our most popular selling systems, the Commuter 2.0. Initially, this is probably the most docile system we’ve used of Carli’s in terms of its all-out off road potential, but let us explain. First and foremost, even what Carli would consider a system for primarily keeping it on the pavement such as this, will outperform most of the competition in every way when hitting the dirt, hands down. Further, this particular build is not going to be blazing the trails at top speed. This truck was built to be used how the majority of people use their trucks, to tow (including a gooseneck), be a daily driver, offer recovery services for some of our more off road orientated builds, and represent our Fuel Bomb Diesel Additives division. But one of the really cool things about how Carli builds most of their systems, are they are expandable. Most kits, as long as they are for the same application and lift height, will feature the same coil springs, track bar, sway bar end links, and numerous other things, meaning that usually only a change to the shocks are required, and sometimes the leaf springs (changing from an add-a-pack to a full replacement). And so……we did. Several months after the initial suspension install and already a few thousand miles logged, Carli was ready to release their Pintop 2.5 system boasting custom tuned King 2.5 remote reservoir shocks up front and King 2.5 piggybacks in the rear. As previously stated, this upgrade would only require a simple shock change, leaving everything else exactly the same. You can probably guess our first reaction….SHIP IT!

With another few thousand miles of on and offroad driving under our belts in our recently upgraded Pintop 2.5 system, we can confidently state that, while the Commuter kit was a drastic improvement over stock, this Pintop is on another level. When on the pavement, it offers supple control, reacting to bumps and ruts in the road with prowess and expected behavior. On the trail, you can confidently hit larger hits at speed, delivering a very balanced feel front to back. The truck does not buck, wander, jerk……nothing. Now, instead of slowing and avoiding obstacles, we found ourselves pressing down on the skinny pedal and aiming right at our targets.

As the RSD2.0 sits now, its been able to log some serious miles, both on the street as well as in the dirt. Its seen a cross country trip from Washington State to Indiana for the Ultimate Callout Challenge where it not only towed a trailer the entire way, but also competed in the UCC, made another trip to Moab, Utah for Easter Jeep Safari, had plenty of time to get dirty both in the mountains of the Pacific Northwest and in Moab, and quite honestly, hasn’t skipped a beat. Adorning fiberglass fenders and 40” Nitto tires, it commands a presence when in a crowd. Driving down the road, its like being in a Cadillac, only taller and way more awesome. Pulling a trailer, it handles it better than in stock form, even with the taller ride height. This is the Swiss Army Knife truck. It will do anything you want it to while being completely dependable, giving you full confidence to take it anywhere, anytime. Do you want to build your own? Give us a call at 888-99-DIESEL or shoot an e-mail to [email protected] and we can help steer you in the right direction. Until then, we’ll keep you updated as new upgrades progress on this build.