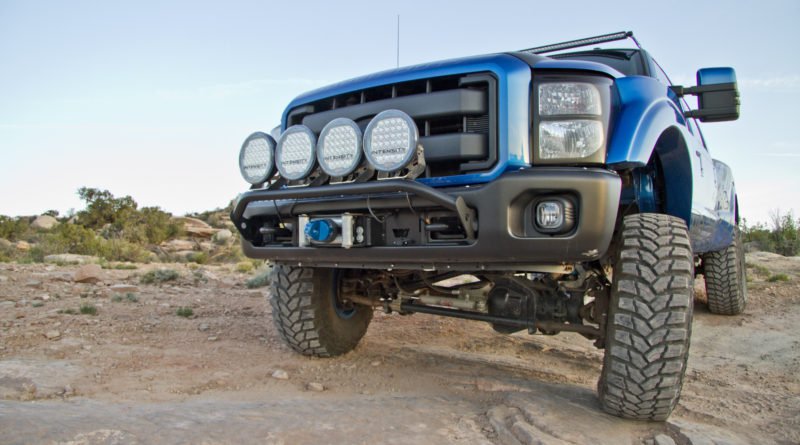 Why Your Powerstroke Needs Better Suspension

Alright, so you’ve got a SuperDuty powered by the mighty Powerstroke diesel power plant. How’s it ride? How’s the steering? You know, just because it’s built to haul doesn’t mean it has to ride like a chuck wagon. Furthermore, did you know that for those looking to lift or level their truck, you can actually drastically improve the ride when doing this, instead of making it worse as many aftermarket lift kits tend to do? Well, its all true.

Before we dive into all of this, lets cover some of the basics and how the steering and suspension have evolved over the years on the different eras of F-Series pickups(this discussion is specifically revolving around four wheel drive models). The Powerstroke powered Ford was first introduced with the 1994 model year and remained until 1997, commonly referred to as an “OBS,” short for “Old Body Style.” The suspension on these trucks were comprised of front and rear leaf springs, and really very basic in nature. If you’ve ever driven an OBS, especially with the original leaf springs that are most likely fatigued and flattened out due to wear and tear, you may have needed a back brace immediately following as you would have felt any crack in the road all the way to your teeth.

The next iteration of F-250 and F-350’s saw the highly anticipated release of the SuperDuty in 1999. This new body style, coupled with a revised 7.3L Powerstroke engine, also received updated suspension and steering components. For the 1999-2004 models, Ford opted to continue use of front and rear leaf springs, and some other similarities to the OBS models, but everything was essentially “beefed up” for lack of a better term to support the larger truck and higher payload and towing capabilities.

The 2005 models saw a big change in an effort to improve the overall ride. Here, we saw the advent of front coil springs. Overall, coil springs have better capability to react proportionately to changes in the driving surface, absorbing small bumps and dips instead of transferring all of the movement to the chassis. The switch over to coils from leaf springs also required the addition of front radius arms and a track bar to secure the axle squarely under the frame. Radius arms are responsible for keeping the front axle in place front to back, as well as maintaining a relatively vertically linear motion of the axle to avoid changes in caster as the axle moves up and down. Due to triangulation and the natural “swing” movement, this is a difficult task, especially as leveling and lift kits are installed that do not adjust for this change. Think of it this way, as your frame moves upward, it increases the downward angle of the radius arms. This angle also changes the pitch of the front axle, which also effects the coil springs’ seat and their tendency to bow as the axle swings. In order to alleviate these issues when lifting, drop brackets at the frame and caster shims at the axle are vital depending on the amount of lift. In many cases, replacement aftermarket radius arms, or the conversion to separate upper and lower control arms, will properly align the axle as well as deliver heightened articulation capabilities.

With the release of the 2008 models and the update to the 6.4L engine, departing from the controversial 6.0L, Ford kept much of the basic geometry of the suspension, but with some great revisions. One of the most noticeable updates were to the rear leaf springs. Ford opted for a longer leaf spring, featuring a broader span between the hangers. This results in more available wheel travel, again, delivering a better ride. Many owners of 2005-2007 model years will even relocate their front spring hanger and swap springs with that of a 2008-2010 model year to gain the same benefit. Beyond the leaf springs, another notable upgrade was done to the steering gear box. Pre-2008 models were proving to not be able to support long term, heavy use, thus Ford sought out an upgrade to complement the new 2008 body style that proved to be effective.

2011 marked another big year for Ford with the inception of the entirely new 6.7L “Scorpion” powerplant, backed with the 6R140 transmission, new body style, and even more updates to the suspension and steering. Along with the push for more power, which Ford easily combated with this new powertrain, the push for higher tow capacities puts additional stress on the suspension, meaning more upgrades were required. As an example, while Ford kept the 10.5″ Sterling rear end, the 31 spline axles were upgraded to massive 37 spline versions. Further, because larger wheel and tire packages were rolled out from the factory, including a 20″ wheel coupled with a tire that is 34.2″ in diameter, a necessary upgrade to the gearbox was released, as well.

The latest model that was rolled out in 2017 brought about even more changes. While the suspension’s geometry and basic design is similar to that of the 2011-2016 body styles, the lighter weight, aluminum body necessitated changes to shock valving, spring rates, and more changes to further strengthen wear items effected by increases in payload capacity and power output. This brings about a good point, as well. Adding (or removing) suspended weight from a vehicle has an immediate impact on the overall performance of a vehicle. As springs and shocks compress in reaction to weight, their rebound and travel are immediately impacted. In order to combat changes in weight and their effect on suspension, there are numerous available upgrades to include airbags, upgraded leaf springs, shocks designed to handle the weight changes, and many more.

And here we are, now that you’re completely versed in the major design changes to the steering and suspension of the SuperDuty throughout its lifespan, how can it be improved, and why would you want to? As we mentioned earlier, just because you drive a heavy duty truck doesn’t mean it has to ride like one. Further, just because you want to lift or level the truck doesn’t mean you have to compromise the ride. Why not make it better? We are huge advocates for installing upgraded components and kits that will not only deliver enhanced off road performance, but also huge gains for the majority of trucks used as a “truck.” Whether you haul a fifth wheel, load round bails on a flat bed, or just daily drive to work, there are upgrades that will absolutely deliver a noticeable, seat of the pants improvement.

If there’s slop in your steering, Red-Head Steering Gears makes upgraded gear boxes that will tighten everything up. If your suspension is rigid, we offer Carli Suspension kits that will not only level the ride, but make potholes and ruts disappear for the daily driver, or allow you to hit the sand whoops in the dunes if you so choose. When your ball joints are in need of replacing, don’t put the same junk back in that will just fail, Dynatrac manufactures the toughest joints in the industry that you’ll never have to worry about again. In short, if something can be replaced, there’s a bullet proof and better built upgrade on the market for it.

Lastly, we get the question on a daily basis, why don’t they install these types of upgrades from the factory, especially with the price tags on these trucks nearing the six digit mark? That answer is simple, if they did, these trucks would be even that more expensive with the amount of markup they have in their own components. When you’re ready to upgrade your Powerstroke’s suspension or steering, we’ve got the parts and the knowledge to get you the end result you’re after.

To checkout some of our most popular suspension upgrades for your Powerstroke, CLICK HERE.