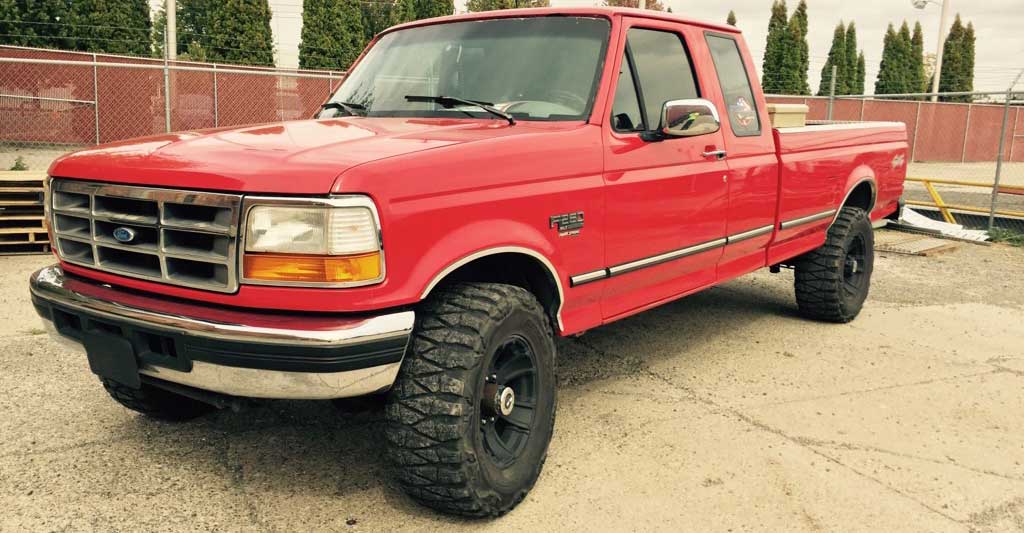 From 1994 to 2003 Ford used a diesel engine sourced from Navistar International which employed a unique method to get the fuel into the combustion chamber, and they did it without using a traditional injection pump: instead, they used oil. The acronym HEUI stands for Hydraulic Electronic Unit Injector, and it’s a system where engine oil is pressurized to about 3,000psi, and that oil is used to push down on a plunger which in turn forces fuel into the engine. Based on the surface areas of the oil and fuel side of the plunger, there is a multiplication effect of 7:1, which means 3,000psi of oil will create 21,000psi of fuel entering the engine. The 7.3 Powerstroke is a two-valve behemoth which measures in at 444 cubic inches and has a maximum stock power rating of 275hp and 525lb.ft. of torque. While that may not get you down the racetrack in a hurry, the 7.3 can tow like a champ, gets great fuel mileage for its size, and is one of the more reliable diesel powerplants Ford has used. When it comes to building a high-performance truck, the best part of the HEUI Fords is the fact they weren’t equipped with a DPF, so it’s open season on the upgrades. But the question is: where do I start?

Walk Before You Run: Stage One

Because the HEUI injection system is controlled by a computer, there is some extra power which can be unlocked with just a few simple mods. Grouped together I considered these “Stage One,” and the name of the game is airflow in and out. The stock exhaust is especially restrictive on an OBS 7.3 Ford as it measures in at only three and a half inches from the transmission to the tail pipe, but that’s not the worst part. Because clearance between the cab and engine is so tight on the 94-97 trucks, the stock downpipe is crimped in several places and is almost flat which creates a huge bottleneck and causes higher EGT. A complete replacement exhaust with a system like the Diamond Eye 5” turbo-back will get your performance upgrades kicked off in the right direction. The stock down pipe is replaced with a 3” mandrel bent pipe, and it transitions to 5” near the transmission for minimum restriction, and the optional muffler will give you an aggressive but not obnoxious sound. A larger exhaust system is well worth the investment and makes a great first modification, since the payoff is reduced EGT and increased power.

A cold air intake is a universal upgrade in the automotive world and works well to add power as long as the air filter is isolated from engine bay heat inside an airbox. You’ll normally have the option of a dry or oiled filter, and S&B has you covered whichever way you prefer with their induction system for the 7.3 that flows 42% better than stock. Functionally, there’s very little difference between the two filters, but a dry filter removes slightly more dirt, while an oiled filter is cleanable and can be re-used many times over. Just don’t forget to pick up an extra filter or cleaning kit to have on-hand for your next service.

If you plan on building past stage one, you’ll need the capability to have custom tuning installed into your truck sooner or later, so why not start with the best? DP-Tuner custom burns chips can be tailored to work with a stock truck or a full-blown race build, and the multi-position chip they’re installed on allows for shift on the fly power changes to suit any conditions. The chip easily installs in the ECM with basic hand tools, and can provide an additional 125hp on a stock engine setup, but when larger injectors and bigger turbos are thrown into the mix, all it takes is a new calibration to be flashed onto your chip to get you back in business.

Like all modern diesel trucks, the 1999 and newer Powerstrokes in the Superduty platform were equipped with an intercooler, but the OBS 7.3 Fords were not. The air coming from the compressor gets very warm, especially if you are running a tuned truck and that will hinder horsepower. Normally, I don’t consider an intercooler upgrade part of stage one, but for an OBS Powerstroke its almost mandatory to add one. Normally, this would be a complicated job with custom fabrication required, but Banks makes it a simple bolt on affair with their Technicooler System for the 1994-1997 Ford F-series. Normally, an intercooler gives some pressure drop, but the twin-ram intake manifold is so well designed, it flows 18% more air than stock even with an intercooler, plus the air temperature entering the engine is drastically reduced and density goes way up.

Once the basics are done with the 7.3, you’ll have a truck which can tow all day long, get great fuel mileage, and still be able to drive to the moon and back a couple of times before needing an overhaul, but your horsepower number will be around the mid 300’s at the wheels, which is nothing to write home about. The stock turbocharger on a 7.3 is a Garret GTP38 and the inducer measures in at 59.8mm. While this turbo will support a bit more power than the stock injectors and HPOP will fuel, there’s no reason to significantly upgrade fueling while still running a stock turbo, so that’s the next item on the chopping block. Your final power goals will dictate the size of the turbo, and when selecting a style of turbo, there are two options: drop-in replacement or S400. The Turbo Thruster II from BD Diesel is a perfect choice for most builds. It’s a drop-in turbo which means no custom parts are required to make it work; it will bolt right in using your existing intake and exhaust components, but the big deal is it features a 66mm billet compressor wheel which will flow 40% more air than stock. With the proper fueling in place, this turbo will support 600hp yet still give cool EGTs and quick throttle response. If you want to go nuts with power and shoot for 700 or more, an S400 style of turbocharger 71mm or larger has always been the go-to, and in order to install one on a 7.3, you’ll need to swap to an up-pipe with a larger T4 turbine flange. Irate Diesel makes a great bolt-on solution for those wanting to make the switch with their 7.3 T4 Mounting Kit. This will allow you to run either an S300 or 400 turbo, and it will come with everything needed to mount the turbo of your choice. For great street manners, an S369 works great, or for high RPM sled pull action, an S471 or larger can be used. Just be sure to size your turbo accordingly and match the airflow potential with the fuel capacity of your injectors.

When it’s time to shop for 7.3 injectors, you might be a bit confused if you’re accustomed to looking at common rail injector specs, since there are a ton of numbers thrown around. Typically, a HEUI injector will be classified by two different numbers, and we’ll use the Full Force Stage 3 Hybrid 205/30 injector as an example. The first number is a volume rating in CC which indicates how much fuel volume the plunger cavity will displace over 1,000 shots, and the second number represents how much larger (in percent) the nozzle is over stock. When upgrading injectors, you’ll need to size both the nozzle and plunger proportionally to work to their full potential. This particular injector with 205cc worth of fuel and 30% over nozzles can support 400whp while producing minimal smoke output. It’s also worth noting this is about the largest sized injector you’d want to run if you still use your truck for towing regularly, but it will require custom tuning to be installed. While 400hp is a huge jump over stock, to get closer to that 600hp number, we’ll need to go a bit bigger on fuel. Full Force Diesel has several options to meet your power goals, and a 350/300 Hybrid can be just the ticket. These bad boys will flow enough fuel for 650rwhp but are also a hybrid design which means they use a larger 7.1mm diameter plunger (vs 6.0mm stock) from a “BD” code heavy-duty injector to push more fuel while using less oil volume to get the job done. The only trade-off to a hybrid injector is you’ll have a slightly lower injection pressure, since the design changes the ratio of the plunger.

Point of No Return:

On a 7.3, fuel enters the cylinder head at around 60psi, but the rail is a dead-head design which means once fuel flows in, it stays there until its used by the injectors. That doesn’t sound so bad on the surface, but the one way ticket can cause air pockets to develop, uneven fuel distribution between all eight cylinders, and when operating at low power conditions for an extended period of time (idling or freeway driving) the fuel can become super-heated which turns it into to a sticky residue. This will build up inside the injectors and can cause poor performance and even premature injector failure, since the residue can cause the moving parts to stick. To prevent all this from happening, its necessary to alter the one-way design and make a path to allow the fuel to constantly circulate through the cylinder head and return to the tank, keeping the fuel cooler, preventing buildup from occurring, and eliminating air pockets. This is where a Regulated Return fuel system comes into play. This kit from Driven Diesel will eliminate the stock fuel filter bowl on top of the engine, and comes with an adjustable regulator and all the hoses and fittings needed to make the conversion, and is a great investment which will protect your stock or aftermarket high-flow injectors. Of course, if you are eliminating your stock filter and making lots of power, you’ll also exceed the capacity of your stock lift pump. Both of those issues can be solved with a Fuel Air Separation System. If you’re making less than 700hp, the 125 GPH version of the pump will be adequate and is the perfect complement to a regulated return system, ensuring nothing but the cleanest fuel enters the engine, and all eight cylinders get the same volume of fuel.

Finally, on a high performance HEUI engine, you’ll need to address the oiling system at some point. The stock high pressure oil pump has its limit, and if you’re running injectors much bigger than 200cc, you’ll need a greater high-pressure oil supply to properly actuate them. Much like adding a second CP3 to a common rail truck, we can add a second oil pump with a Dual HPOP kit. This splits the oil demand between two pumps, which increases performance potential and reliability all at the same time, and it enables you to run the largest injectors with no loss of injection control pressure.

The question you need to ask yourself when considering whether or not to invest some “performance dollars” into your HEUI 7.3 Powerstroke (or any truck for that matter) is how much do I like this truck, how long do I want to keep it, and how much power do I really want to make? If you love your 16+ year old truck and can wrap your head around the fact that you’ll never make more power than a modified common rail, jump in headfirst. There are plenty of parts available and lots of knowledgeable folks out there, and the engines are very reliable, not to mention incredibly strong. As long as you put emphasis on cooler EGT and greater air density entering the engine, you will have a long lasting and efficient powerplant that will propel your Ford for many years to come. Plus, it will put a giant smile on your face every time you smash the go pedal.