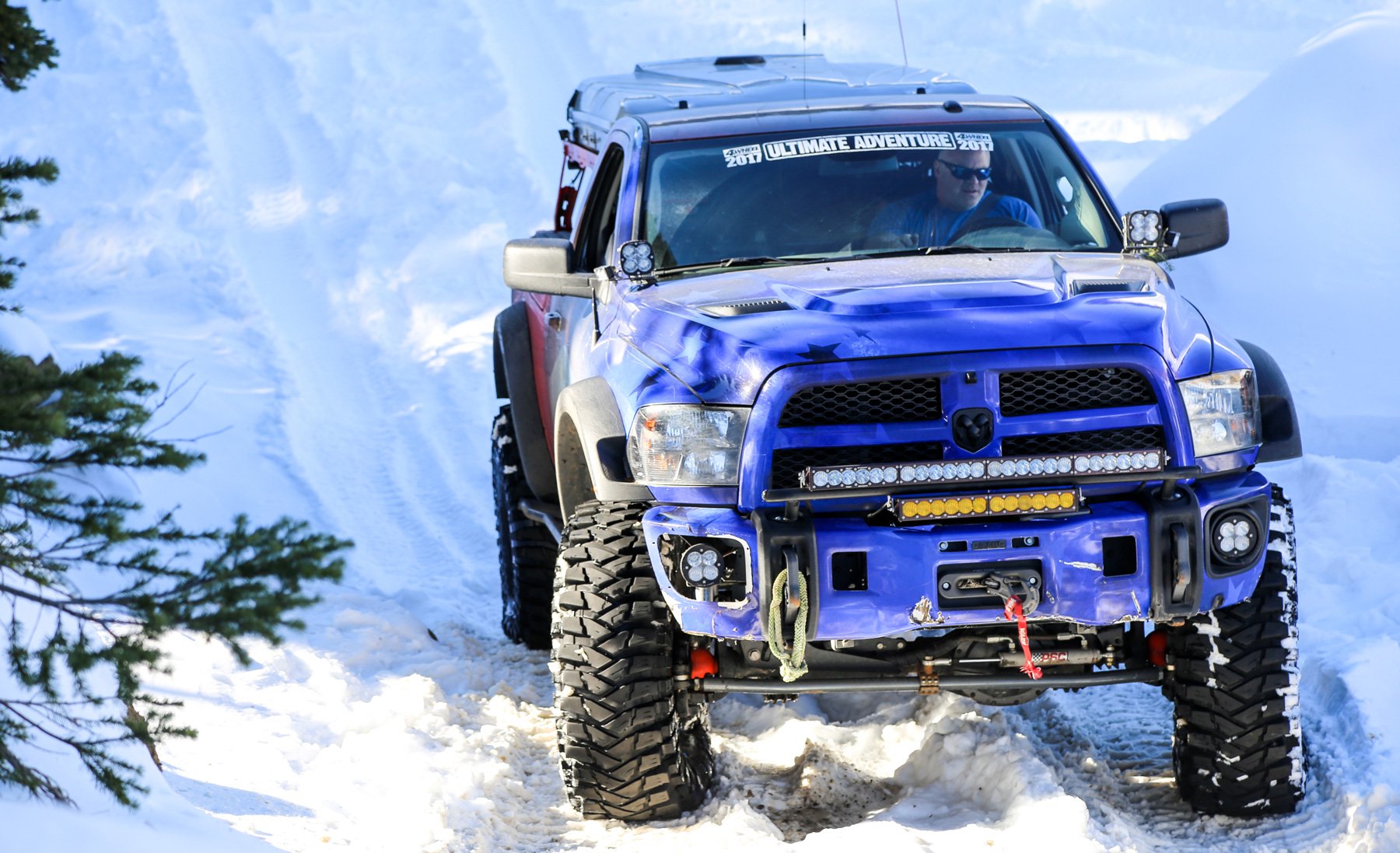 How to Keep Your Diesel Running Through the Winter

Depending on what part of this great nation you live in, winter is coming, if not already upon us. For most Americans, the change of seasons means holiday shopping, skiing, hot cocoa and nights by the fireplace. Many drivers won’t think twice about their vehicle as the temperature drops, other than to make sure their snow tires are mounted up and the heated seats still work. According to a not very thorough internet search, about 78% of vehicles on the road are powered by gasoline, and based on the fuel and engine design, petrol engines work great in just about any temperature and are able to start up and run with no drama at all. However, for the chosen few who have been called upon to drive a diesel truck, we do have a few extra considerations to make before the first deep freeze, and the questions we’ll answer today are (1) why diesels behave different in colder weather, and (2) what you can do to keep it starting and running in tip top shape. The answer to both is directly related to how a diesel engine runs: heat.

Like any four-stroke, in a gasoline engine the fuel and air mixture is squished as the piston travels upwards on the compression stroke, but nothing happens until the spark plug sends a tiny bolt of lightning into the engine, which ignites the air/fuel mixture converting heat into motion. Instead of a spark, a diesel engine relies on super-heated air to light things off. As the piston raises on the compression stroke, the air charge is rapidly compressed, and according to the laws of physics, the air heats up. In order for diesel fuel to combust from compression, the temperature of the air needs to be at least 850 degrees C, which usually isn’t a problem with compression ratios of 16.5:1 or more. But, whenever the temperature outside drops, it becomes much more difficult for the reaction to take place.

Luckily, your diesel has some built in assistance to help it fire up when the snow starts to fall, and depending on the model of engine, it could use one or more methods. The most common is a glow plug, which screws inside your cylinder head, and slightly protrudes into the combustion chamber right next to the fuel spray from the injector. When the conditions are correct, an electrical current is applied and the tip glows red hot (around 1,100 degrees C), which quickly warms the air and helps the fuel mixture ignite. Most trucks will run the glow plugs for about 10-20 seconds before cranking, and for about 2-3 minutes after startup as well. Some engines utilize a grid heater which operates with the same principals of electrical resistance, but instead of in the combustion chamber, the grid is in the air stream right before the cylinder head. A grid heater can be used in conjunction with glow plugs, or by itself like in a Cummins. As useful as they are, glow plugs and grid heaters are known to fail from time to time and cause hard starting. Thankfully, most modern trucks will throw a check engine light if a glow plug has failed, and replacements are very inexpensive, usually less than $15 per cylinder. However, if you are attempting to swap a set on your own, you must exercise caution when unscrewing the plug from the cylinder head, as its very easy to twist off the plug if you get too enthusiastic with the socket. In order to prevent that from happening, specialized tools are available which will help break away the carbon and soot which have built up, and get the glow plugs out in one piece.

Because of the massive amount of current required for glow plugs, grid heaters, and the starter motor, if your batteries are a few years old, I always recommend performing a simple load test to get an idea of your battery’s health before the cold weather hits. If they are questionable, replace them BOTH, because if one is on the way out, the other will be right behind it. And just in case you leave the lights on overnight, it’s always a good idea to keep some sort of jump pack stashed in the truck, because you never know when murphy’s law will strike.

The battle against cold isn’t over as soon as the engine starts, because for ideal power and efficiency your engine needs to quickly reach full operating temperature and stay there. The thermostat is a valve in the cooling system which regulates the flow of antifreeze through the engine, and on some models like the Duramax, it’s very common for the thermostat to fail and get stuck in the open position, which means coolant is allowed to circulate too quickly, and the engine never warms up. If your temperature gauge never reaches the 210 mark (which isn’t accurate by the way, 210 on a GM gauge is actually about 185) that’s a dead giveaway you’re running too cold. By installing a replacement pair of thermostats, the flow of coolant is regulated, and your Duramax can now reach its full operating temperature of between 185 and 190F, and work at its peak efficiency and power.

Diesel fuel is a petroleum distillate, however it’s a much less refined product than gasoline, and a major component is paraffin wax: this is part of what gives diesel its lubricating properties. In the summertime, the wax is suspended, and the fuel remains in a liquid state. However, as the temperature of the fuel drops, the wax starts to crystalize around 32 degrees F which gives the fuel a cloudy appearance, and if the temperature drops closer to 15 degrees F, the paraffin will start to solidify, turning your once liquid fuel into a solid gel-like substance. If you could imagine your tank being filled with candle wax instead of diesel, you can see the problems gelled fuel will give. It won’t flow anywhere, and will plug your fuel lines, filters, pumps, and even the injectors. When a truck has the fuel gel up, it will quit running, and will remain immobile until you bring the truck inside a heated shop for a few hours and let the fuel return to its liquid state. To prevent this from happening, most fuel retailers sell a winter blend of diesel which has anti-gel additives already in it, but the tradeoff is a fuel which has less energy per gallon, meaning worse fuel mileage. Cetane is a rating of how easily a fuel ignites, and though it’s not widely known, the minimum rating in the US is 40, but most pump diesel fuel is somewhere in the 42 to 46 range. When it comes to colder weather, a higher cetane rating will help a fuel auto-ignite quicker, which means better cold starts, but you can’t simply choose high cetane diesel at the filling station: what you see is what you get.

Because you never really know what you’re getting at the pump, adding a small dose of a fuel additive like F-Bomb Hellfire each time you fuel up is an inexpensive way to compensate for the shortcomings of pump fuel. It only costs about 8 cents per gallon to treat, and Hellfire will add 8 points of cetane to your fuel which will improve cold weather startups, but there are several other benefits as well, like a reduction of emissions, greater fuel mileage, more power, and cleaner fuel injectors. In addition to running an additive in the winter (or all the time honestly), you should always keep your fuel filter service up to date, and because of the temperature fluctuations and higher likelihood of water condensing in your fuel, always make sure to keep the water separator drained.

When it comes to engine oil for a diesel, the go-to has always been 15w40. We know it’s thicker than what goes into a gasoline engine, but what exactly do the numbers mean? The first number (15) is a rating of the cold viscosity (“W” means winter) and the second is a rating of viscosity when the oil is at operating temperature, and the higher the number, the thicker the oil. Generally, a mineral base 15w40 like Rotella is great for temperatures warmer than 10-15 degrees F, but when the mercury drops, the oil becomes much thicker, which leads to harder starts. Just imagine spinning a knife through peanut butter and you get the picture. Along with the harder cranking, you’ll get less initial lubrication when 15w40 is cold, since it now takes more time for the thicker oil to flow though the oil galleys, around the bearing surfaces, and then drain back to the pan to complete the path again.

If you live in a colder climate, you might want to consider switching to a 5w40 synthetic oil for your diesel. The “5w” part means it will flow through your engine much easier when cold, so the engine will crank over faster and get lubricated sooner after fire-up. As soon as the oil gets up to operating temp, it has the same warm viscosity as the thicker dino-oil, giving the best of both worlds. A great choice for oil which you can run year-round is Schaeffer’s 9000 Synthetic 5w-40. Not only will it help in colder weather, but it can also help to improve fuel economy and reduce wear inside your engine, plus it can safely be run at 9,000-mile drain intervals or more if you perform an oil analysis.

One more fluid need to keep an eye on during colder temperatures is your ATF. If you are among the many who uses your truck to push a snowplow, be sure to keep an eye on the fluid temperatures, as many a plowtruck has lost a trans due to overheated fluid. The problem is you are putting a lot of heat into the fluid by pushing a plow with a massive pile of snow in front of it, and because you’re not moving very fast and have a giant metal sail blocking the front of the grille, the transmission fluid cooler has very little airflow being pushed across the fins to remove excess heat. Make sure to change your trans fluid and filter before a season of plowing, and if you notice the temps are creeping up regularly, it might be time to install a larger auxiliary transmission cooler.

If you have seen the memes circulating, you already know the cold start videos are coming, which somehow proves whoever’s truck is more difficult to fire up is the winner. For me, a truck which takes six minutes of cranking and a whole can of ether to start doesn’t seem very practical. I’m more of the remote start and heated seats kind of guy, but if you take the time to ensure your truck is properly maintained and equipped, starting ‘er up in the coldest of weather won’t be a problem.