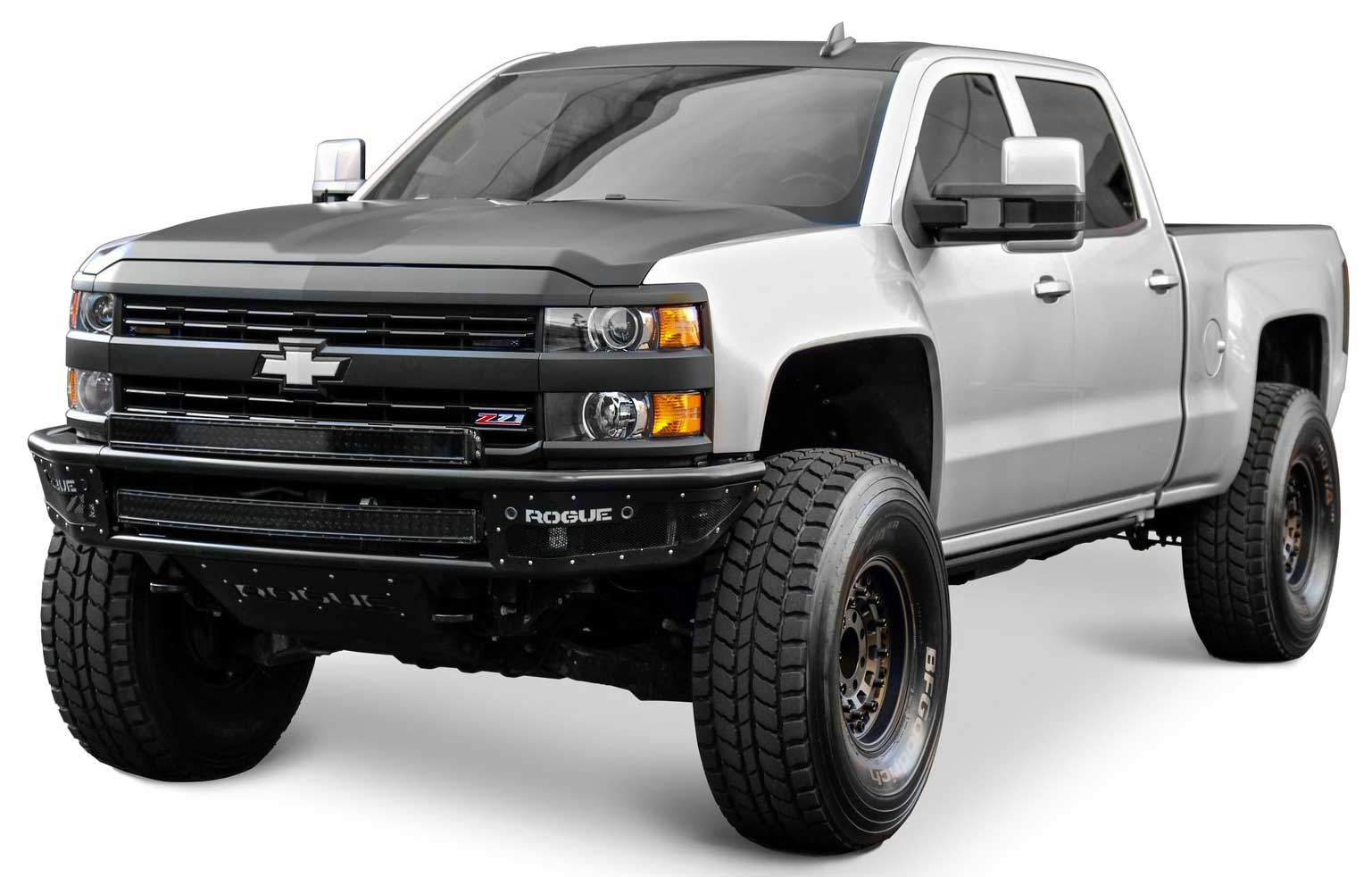 The Duramax powered Chevrolet Silverado or GMC Sierra is one of the most upgraded diesel trucks on the road, and you can build one to fit for nearly any purpose, whether that’s racing, hauling, or even off roading, but for most of those disciplines at least some upgrade to the Duramax will be needed. Whether you want to upgrade the injectors in your LB7 for more power or throw a better turbo on your LML to control EGT’s the options are nearly endless, but it can be hard to figure out where to start. To help point you in the right direction, we’ll go over some essential upgrades for the Duramax, based on the body style of truck.

The GMT800 platform ran from 1999 to 2007 and is a classic body style which still is a favorite of enthusiasts today. Over the short run of the GMT800, it was home to three different versions of the Duramax, the LB7, LLY, and LBZ. Upgrades for these engines are plentiful, and the best part is the GMT800 body style is pre-emission, which means you can have a little more leeway with your engine upgrades, but the bad part about the aging chassis, is they often have a few maintenance items which need to be taken care of before horsepower is added.

If you’re driving an early 2000’s Duramax LB7 or LLY, one of the most often neglected and frequently worn parts of the chassis is the steering gear box. If you have to saw back and forth on your steering wheel simply to maintain a straight line down the road, chances are its shot and needs to be replaced, but if you go to a parts store and grab a simple remanufactured box, chances are the replacement will be of a lesser quality than the original and your symptoms may not improve. The best solution for your Duramax steering problems is a Red-Head Steering Gear Box. Red-Head is an American made company, and their manufacturing process involves several unique steps like adding needle bearings into the housing and fitting custom sized ball bearings into the worm gear assembly to eliminate play. Combined with their precise quality control and ultra-stringent core selection, a Redhead Steering gear box will provide a much tighter and more precise driving experience for your Duramax powered 2500HD.

In order to help the transmission fluid run a little cooler, often the first upgrades to the Allison are a deep fluid pan and a larger external cooler, but it’s easy to forget about the stock cooler lines. The original lines are made from aluminum tube, but they have short sections of flexible rubber hose in the middle, and the two are connected with a crimp. As the miles and age increase, the old rubber has a tendency to get brittle and leak or sometimes even burst which can leave you with a messy driveway or in a worst-case scenario, stranded on the side of the road after all the ATF is pumped out. The best bet if your transmission cooler lines are leaking is to eliminate the problematic stock lines altogether and replace them with a hydraulic hose style transmission cooler line kit from Fleece Performance. The kit comes with everything you need to adapt your transmission, radiator, and fluid cooler to the AN style fitting which makes installation a lot easier, and the lines will last a lifetime and ensure you have no more transmission fluid leaking out.

In 2008, GM rolled out a new body style which was a huge departure from the classic looks of the previous generation, and there are plenty of Duramax performance upgrades available for this body style as well. One interesting note about the GMT900 platform: for the first couple years, the chassis was almost identical to the earlier GMT800 trucks, which is why you see so many steering and suspension parts that fit 2001 to 2010 trucks, which overlaps both body styles.

All Duramax powered trucks use independent front suspension which provides a smooth ride, but as a result, oversized tires and increased horsepower will put extra stress on the front steering components. This causes the stock parts like the idler and pitman arm to wear out prematurely or even break under extreme conditions, so before you add more horsepower to your LMM you want to make sure the chassis has a solid foundation.

For me, any worn out part is a perfect excuse for an upgrade on the Duramax, and if you want to increase the strength of your 2500HD’s steering system, you need to check out Rare Parts. They offer Extreme Duty Idler Arms, Pitman Arms, and even Tie Rods which will keep your tires pointed in the right direction at all times. The Idler arms are made from forged and heat treated 1541 Steel and are much larger than the originals for extra strength. The joints use induction hardened ball studs for excellent wear resistance, and they make a perfect upgrade to the chassis of any 2001 to 2010 Duramax powered Silverado or Sierra. Not only will your truck drive in a straight line again, but when you want to put that power down to all four wheels, you won’t risk breaking anything.

In 2011 two major things changed on the GMT900 trucks: first the chassis was completely redesigned to increase its hauling capacity and give the truck a smoother ride, and the second change was under the hood. The LMM (which was essentially an LBZ with extra emissions equipment) was dropped in favor of the LML, which had the smallest Duramax turbo to date. This allows for excellent spool up and throttle response, but can limit your horsepower potential and give some extra toasty EGTs. It may be tempting to order a fixed geometry S400 turbo for its massive horsepower potential, but a too large turbo is almost worse than one too small. For most customers, a single 64mm VGT turbo is the best option for a turbo upgrade on a Duramax.

The Stealth 64 from DuramaxTuner will flow enough air to support 620 horsepower at the rear wheels, but without any of the sacrifices you get from a larger turbocharger. Because it retains the factory style VVT exhaust housing, the spool up time is quick as stock, your exhaust turbine brake still functions, and the larger compressor gives you more horsepower than stock while running at a cooler EGT which is arguably the single most important benefit to any Duramax upgrade.

If you are swapping the turbocharger on your Duramax, you better be prepared to shout some four letter words and get a few banged up knuckles, and mainly that’s due to the location of the up-pipe bolts which attach to the bottom of the turbocharger below the turbine outlet. Yes, it is a big pain to disconnect the hardware on the back of the Duramax turbo, but once you have ‘em out, you are halfway through with the job of removing the up pipes and manifolds. While there are a lot of parts of the LML exhaust you shouldn’t modify, the manifolds and up pipes are fair game for an upgrade. PPE Exhaust Manifolds and Up Pipes are an excellent companion to the Stealth 64 because they flow 20% more than stock which gives quicker spool and lower EGT, but they are also 50-state legal because they connect to the EGR system, so all the emissions components will still function.

In 2015 another redesign was released for the Silverado and Sierra lineup, and just like before, they delayed the engine and chassis updates, so when the newest body style came out in 2015, it still had the same LML that was used back in 2011. This meant that the same recipes for increasing horsepower on the Duramax would carry over, and for an LML one of the main ingredients is fuel. If you’ve done any research on the Duramax, you’ve heard about some of the problems which plague the LML, and it’s true, a lot of the times the injection pump is the culprit, but it’s not entirely to blame. The root of the problem lies (in part) with the ultra-low sulfur diesel which is found in today’s fuel stations in North America, and the fact that it has much less lubricity than fuels in Europe (where the CP4 was designed to operate). In addition, the precise tolerances inside the pump make the Duramax CP4 injection pump particularly vulnerable to even the smallest amounts of dirt in the fuel.

You can extend the life of your injection pump simply by installing a FASS or AirDog lift pump which is considered by some to be the best lift pumps on the market for the Duramax. These lift pumps have two jobs: the first is to move fuel from the tank to the injection pump, but the second and most important for an LML is the filtration and water separation. By removing dirt as small as 3 microns, the CP4 will have no contamination to induce wear, and by feeding the injection pump a constant supply of fuel, the CP4 pump can better maintain its rail pressure under full load, and that benefit applies to any year of Duramax.

Even with a lift pump in place, the stock CP4 on the LML Duramax will hit a wall somewhere around 550hp, so if you want to push things further, you’ll need a greater volume of high-pressure fuel. The most popular injection pump upgrade on an LML is a CP3 Conversion, but if you are chasing a higher power number, you need to skip the stock displacement CP3 pump and go right to a 10mm stroker pump

For the 2020 model year, GM once again updated the body styling (much to the dismay of some truck owners) but luckily, they kept the previous generation of engine. The L5P Duramax had been in use since 2017 and its proven to be a very reliable and powerful engine, but even so, there are ways to improve its output. If there was only one upgrade I could do to my 2020 L5P, it would be the Banks Derringer inline tuner. True ECU calibration for the L5P is insanely expensive, but for $740 and an easy hour of install time you can extract an additional 81hp and 144 lb.ft. of torque from your 2020 L5P while protecting you engine with the built in fail safes Banks is known for, like EGT control and transmission slip detection.

Mods for every Duramax

Making all the power in the world does you no good if you can’t safely put the ponies on the ground. Because of the immense amount of torque the Duramax can produce, there is a ton of leverage on the rear axle during acceleration, which causes the leaf springs to twist upward, and in some cases leads to a phenomenon known as wheel hop.

This effect is exaggerated when the truck is lifted with blocks between the axle and leaf spring or if the overload spring is removed to create a softer ride, and it can be quite unsettling when you experience wheel hop for the first time. If left unchecked, this shock load can lead to universal joint or driveshaft failure. To prevent this, one chassis mod every Duramax powered truck should have is a set of BDS Recoil Spring Loaded Traction Bars. They will tame wheel hop and axle wrap without affecting the ride quality or suspension travel, and by keeping your tires planted in the dirt (or on the pavement) your Duramax powerplant can focus on making the truck accelerate instead of just spinning its wheels.